Home / Society / High-profile accidents in Kharkiv: the second suspect burst into tears on the court

High-profile accidents in Kharkiv: the second suspect burst into tears on the court 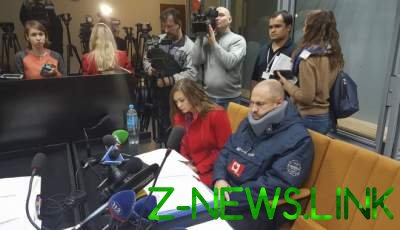 Drones threatened to declare a dry hunger strike if he does not soften the measure of restraint.

The court of appeals of Kharkiv on Thursday, November 16, we held a second hearing on the remand of the second participant of road accident on a street of Sumy Gennady Dronovu. A week ago the Kiev district court sent him to prison for 42 days. The defence did not agree with this decision and immediately filed an appeal.

Gennady drones burst into tears during communication with the court via video link about the appeal for his arrest.

According to the driver of the Volkswagen Touareg, it purposely want to malign to justify Zaitsev. He also complained about the condition.

“My health deteriorated because I didn’t recover,” said drones.

He said he will declare a hunger strike if the court does not satisfy the appeal of mitigation to it measures of restraint.

“If the court will not be fair will not be fairly considered my appeal, the appeal with my attorney and I will not change the measure of restraint, I would starve… I don’t want anything to drink or eat before the time, until a fair legal decision”, – said the drones.

In turn, the Prosecutor objected to the appeal, referring in particular to the fact that the drones can simulate the deterioration of health is to delay or evade a pretrial investigation.

We will remind, in the evening of 18 October at the crossroads of Sumskaya street and alley in the near Kharkiv Lexus RX running girl 20 years old, moving on prohibiting traffic light, collided with a VW Touareg. As a result of collision the Lexus took off on the sidewalk and made arrival on 11 walkers, 5 of whom died on the spot. Another girl died from his injuries in the hospital on the morning of 26 October.

Earlier it was reported that a pregnant, injured in crash with Lеxus in Kharkov, remembers nothing about the accident.