‘He should resign’: Biden leads Democrats’ sprint away from Cuomo after sex harassment probe returns guilt 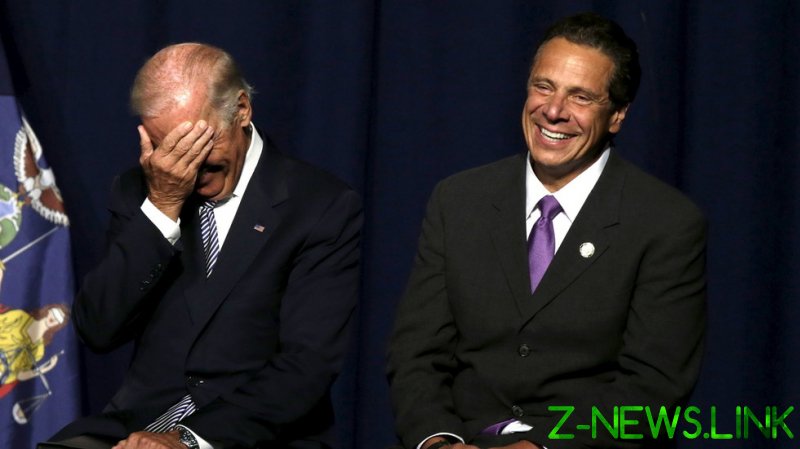 Biden cleared up intense speculation among the party faithful when he suggested the three-term New York governor call it quits during a press conference on Tuesday.

“I think he should resign,” the president ventured, even while admitting he hadn’t actually read the report from New York Attorney General Letitia James into the sexual harassment investigations that have piled up around Cuomo since December.

Even before Biden gave the thumbs-down on Cuomo, the publication of James’ report had triggered a renewed outpouring of calls for the governor to resign from other high-ranking Democrats. Senate Majority Leader Chuck Schumer and Sen. Kirsten Gillibrand (New York) both called for him to step down, calling “the reported actions of the Governor…profoundly disturbing, inappropriate and completely unacceptable.” New York Mayor Bill de Blasio, never a big fan of Cuomo’s, also insisted he resign.

President Joe Biden had previously said he would support Cuomo’s resignation if the investigation confirmed the harassment allegations, though some wondered if he might hold back from speaking up due to the possibility it would reopen discussion of his own sexual misconduct allegations. Several women have accused Biden of touching them inappropriately.

Biden was unwilling to venture any further than his suggestion that Cuomo resign, specifically regarding the possibility of impeachment or prosecution. Assembly Speaker Carl Heastie launched an impeachment probe into Cuomo earlier this year and announced on Tuesday that it would be forwarded to Assembly members and legal staff with the aim of moving it forward. Attorney General James declined to make a recommendation as to whether Cuomo should be prosecuted in her office’s report.

Following Biden’s confirmation that he would back Cuomo’s departure, Speaker Heastie confirmed that lawmakers would conclude the impeachment investigation “as quickly as possible.” He said the governor “has lost the confidence of the Assembly Democratic majority” and “can no longer remain in office.”

Earlier on Tuesday, House Speaker Nancy Pelosi also called for Cuomo’s resignation, triggering the avalanche of high-ranking party members that have since abandoned the governor, who once held presidential ambitions.