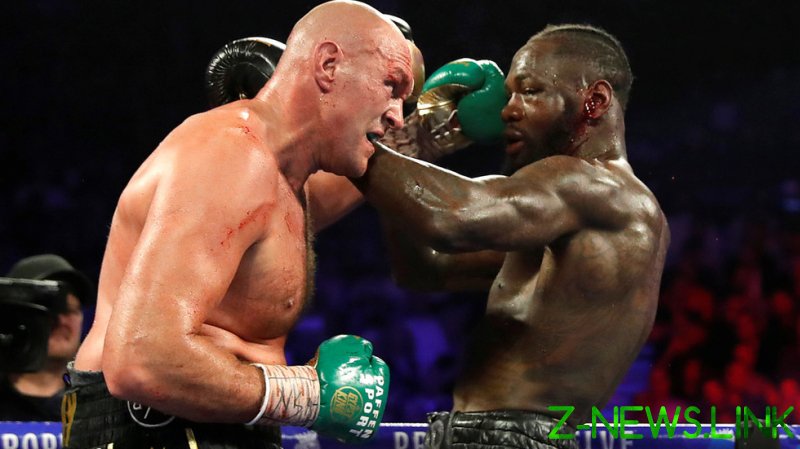 Not content to accept the comprehensive beating Fury gave him in good grace in February 2020, Wilder went on to make a procession of fanciful suggestions that sounded dangerously like excuses for his defeat, including blaming his ringwalk costume for sapping his energy by being too heavy.

One of the arguments that earned derision for the dethroned WBC king was an allegation that Fury’s gloves had been tampered with, arguing that they moved unnaturally and contained a weight that had left a dent in his head.

Since sacking coach Mark Breland, who threw in the towel and has been singled out by Wilder as part of what he believes is the conspiratorial nature of his loss, the ‘Bronze Bomber’ has stuck to his guns with his preposterous-seeming accounts of what really happened.

The build-up to his third fight with Fury, which takes place next month, might seem like the perfect time to dispense with the circus by opting to lay off the outlandish rhetoric. Instead, Wilder has again insisted that he was defrauded in a heavyweight title fight under the rule of the Las Vegas Athletic Commission, when both camps had a representative to inspect the accessories of their rival.

“He’s got to keep up now,” Wilder said on Instagram of Fury, who has laughed off the accusations. “He’s got to do the same sh*t he did a second time. We know he’s going to be under the microscope. He got a rap sheet of cheating and abusing drugs.

“But you’re talking about a guy like me who doesn’t have rap sheet, who just has pure power, and I’m lying? And you’ve got a guy who’s lying but he’s telling the truth?”

Wilder’s power rarely appeared to trouble Fury, although it knocked out all but one of the 41 opponents he fought before meeting the towering Briton.

The vengeful American says Fury’s artificial might on the night was missed through a mix of ignorance and naivety on the part of Wilder’s manager and co-trainer, Jay Deas, who had responsibility for checking his opponent’s gloves.

“Jay is still here,” Wilder said when it was put to him that Deas might have suffered the same dismissal as Breland.

“Jay is definitely with me. I understand the situation in the back [locker room] – sometimes you can just be inexperienced, to not know what to look for.

“I had guys on my team like Russ [Anber]. He’s a glove guy, he makes gloves, so he knows what to look for.

“But Jay is mostly inexperienced with gloves and he’s on the friendly side. But there’ s a point in time when you want it back in blood.

“Ain’t nobody friendly on this squad no more. They stole that. I gave you all the good side of me and you all villainized me.”

Now trained by Malik Scott and making characteristically bold predictions about his chances of turning the tables on the man who blew him away when they last met, Wilder says the glove scandal is one that “many people in boxing” had “heard” but “didn’t speak” about.

“When you ask them about the gloves, they go, ‘Well, I didn’t, uh, uh.’ You can’t not see that. Gloves do not bend unless you’re double jointed or something.

“How the hell does it bend at a 90-degree angle? Nor does it have loose space in it. It’s impossible for that to happen, on top of all the other things.”

A feud of a cross-familial kind could also be on the cards when Wilder returns to the ring. His brother, Marsellos, says he is open to fighting Fury’s brother, Tommy, after the unbeaten prospect talked up the idea of a scrap on the undercard.

“That fight would make headlines,” Fury told Queensberry’s The Lowdown show, calling a potential bout on his brother’s bill “a privilege”.

“I am up for that fight. I am up for anything. I am over here training, in shape. So whatever comes, I will be ready for. I’ll have a piece of him. I called him out before and he never replied.”

Marsellos has not fought since being knocked out by Dustin Long in 2019 but clearly carries echoes of his brother’s bravado.

“Hey Tommy Fury, keep that same energy when you see me,” he told the UK reality TV star. “You’re speaking on my name but your team ain’t sent me a goddamn thing. I don’t do no capping. I’m a real-life entertainer, boy.”

Fury initially said of Wilder: “If his brother wants the same as Deontay got, then he can get it. I see a lot of people tweeting about wanting to fight me but I never saw that before I went into [TV show] Love Island so I know what they are after.

“If Marsellos Wilder is one of those then I will happily oblige. My advice for him would be to keep quiet and stay in America, where he can try to help his brother recover from what Tyson did to him, fair and square.”