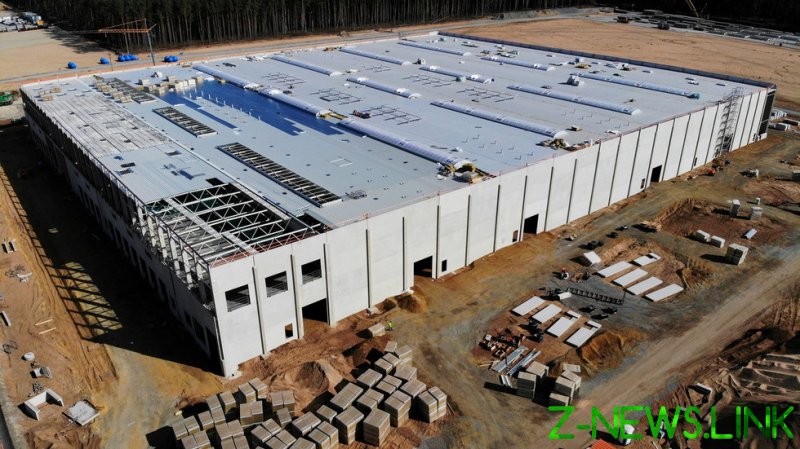 A fire at Tesla’s so-called ‘gigafactory’ in Gruenheide outside Berlin early on Wednesday damaged electricity cables at the site, a spokesperson for Brandenburg police said.

Forensics officers were dispatched to the scene and police are looking at a potential crime of arson, a spokesperson for the state criminal investigation office said, after an activist group claimed it was behind the fire.

A photo by German news wire DPA showed forensics officers surveying a scorched area of ground under the cables, which appeared to have been damaged

On Wednesday, the ‘Vulkangruppe’ – which translates as Volcano Group – claimed responsibility, saying its activists had set fire to six high-voltage cables.

The group, described by Der Tagesspiegel as “left-wing extremists”, published a lengthy statement on the Indymedia open-publishing site saying: “Tesla is neither green, ecological nor social.”

The post said the group was against the “lies” of the company’s “allegedly clean, climate-friendly battery-powered vehicles”, arguing they have a detrimental effect on the environment, and also took aim at its CEO Elon Musk and his SpaceX project.

Tesla’s factory, which it says could produce 500,000 of its Model Y cars, was due to open on July 1, but that date has been pushed back towards the end of 2021 due to expansion plans.

Germany’s State Environment Agency has said the start of construction should be delayed while it reconsiders Tesla’s application, given the company’s plans to build a battery cell plant as part of the complex.

Activists have previously raised concerns over the factory amid fears that it may consume too much water, which could affect nearby wildlife, including protected species.

Tesla has not responded publicly to the fire or the launch of the police investigation.