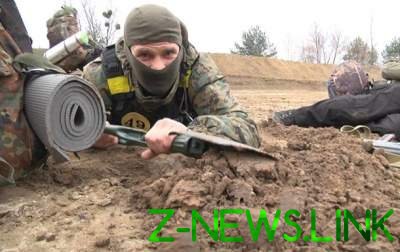 Training center units of the special police for the contestants in the special forces of KORD began a course of endurance. About it reports a press-service of KORD.

“The candidates came from nine regions of Ukraine. In a time of extreme “survival” their limit in many ways: they sleep less, eat mainly Shaam and carry enough heavy physical activities”, – said the head of the Department of KORD Nicholas Poti.

In addition, psychologists work with fighters and study the leadership potential of the future commandos: their ambition, creativity, desire to improve oneself, interests, etc.

The organizers of the course on survival was told about the “flavor”.

“For the first time to organize and conduct such events involve the heads of the Departments of KORD in the regions where it will continue to work with the newly formed commandos. The aim is to see and analyze the strengths and at the same time the weaknesses of their potential fighters. Will they act on Committee for selection, where they will argue why they like this or that candidate or Vice versa – to declare that someone is not worth to take the riot police”, – is spoken in the message.