Home / INCREDIBLE / Found another “missing link” in the evolution of birds

Found another “missing link” in the evolution of birds 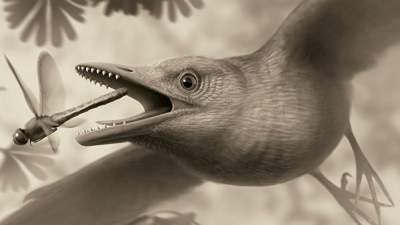 Among paleontologists there is no agreement on how and why the ancestors of birds acquired feathers and wings.

Paleontologists found next to the remains of the famous Archaeopteryx imprints of the body of another ancient bird who could fly. Its opening proved that the ancestors of modern birds have mastered the secrets of flight almost immediately after its appearance, according to a paper published in eLife.

“At first we thought it was another Archaeopteryx. They are very similar, but the details when we compared them among themselves and compared with later ancient birds, it turned out that we are dealing with a bit more “advanced” feathered creature. It could really fly,” says Oliver Rauhut (Oliver Rauhut) from the Ludwig Maximilian University in Munich (Germany).

Today among paleontologists there is no agreement on how and why the ancestors of birds acquired feathers and wings. Some scientists adhere to the classical theory that feathers enabled birds to develop a new ecological niche – the airspace is not available for dinosaurs. Other paleontologists believe that the feathers did not appear for the flight, for insulation or to attract the attention of females.

The roots of this dispute stems from the fact that we know almost nothing about how was the way of the wings of the first feathered creatures, such as Archaeopteryx. Prints of their wings almost do not carry any information about the way the muscles of their owners and how they managed the position and movement of the feathers.

Recently, paleontologists were able to approach the solution of this riddle, having opened in Spain a few well-preserved imprints of the body and the fossilized remains of Archaeopteryx. Their analysis showed that the first protopic muscles attached to their bones in much the same way as in modern birds, which was the first evidence that these creatures could fly.

Rauhut and his colleagues have discovered a new “missing link” in the evolution of flying birds, opening a second feathered creature that lived on the territory of the future of modern Europe in the late Jurassic period, about 150 million years ago.

These remains were found in the limestone deposits, located near the banks of the altmuhl, near the Bavarian town of Solnhofen. Half a century ago there were found the remains of Archaeopteryx, the oldest of perioptic whose status today is often disputed.