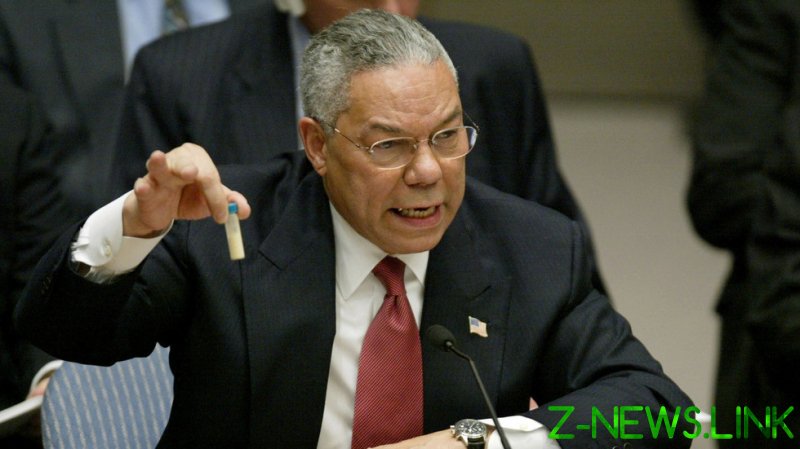 Colin Powell, who was the first black individual to serve as US Secretary of State, has passed away, his family announced on Monday in a post on his Facebook page. “We have lost a remarkable and loving husband, father, grandfather and a great American,” they said, adding that he had been fully vaccinated against Covid-19, but that it eventually took his life.

His family thanked the medical staff “for their caring treatment.” The cause of death was stated as “complications from Covid-19.” He passed early on Monday morning. Powell had been diagnosed with multiple myeloma, according to media reports, a type of blood cancer that hinders the body’s ability to fight infections.

Powell was a 35-year veteran of the US Army who rose to the rank of four-star general before entering politics. He served as the chairman of the Joint Chiefs of Staff, the highest military position in the US Department of Defense, under President George H.W. Bush, and was the youngest person and the first African American to hold that position.

He was even touted to become the first black president of the US, after his popularity soared following the US-led campaign against Saddam Hussein’s invasion of Kuwait in 1990.

He later served as George W. Bush’s first secretary of state and, during that time, became the highest-ranking black public official. In 2003, Powell made his administration’s case for invading Iraq to the United Nations, citing faulty intelligence that Hussein’s Ba’athist regime was stockpiling weapons of mass destruction.

In a now-iconic photograph, he held up a model vial of faux anthrax in front of the UN General Assembly, but would come to acknowledge the event as a “blot” on his record. What ensued was a ruinous eight-year war.

It is estimated that more than a million Iraqis lost their lives in the violence or due to the deprivation caused by the invasion, and thousands of American troops died during the course of the US’ ventures in Iraq. The aftermath of the invasion led to widespread sectarian violence and the rise of Islamic State (IS, formerly ISIS).

The former military man became disillusioned by his party’s move to the right and even publicly supported Barack Obama in his bid for the presidency.

Powell also endorsed Joe Biden’s candidacy to lead the country, stating that he would be “a president we will all be proud to salute.“

Powell had three children and is survived by his wife, Alma, whom he married in 1962.