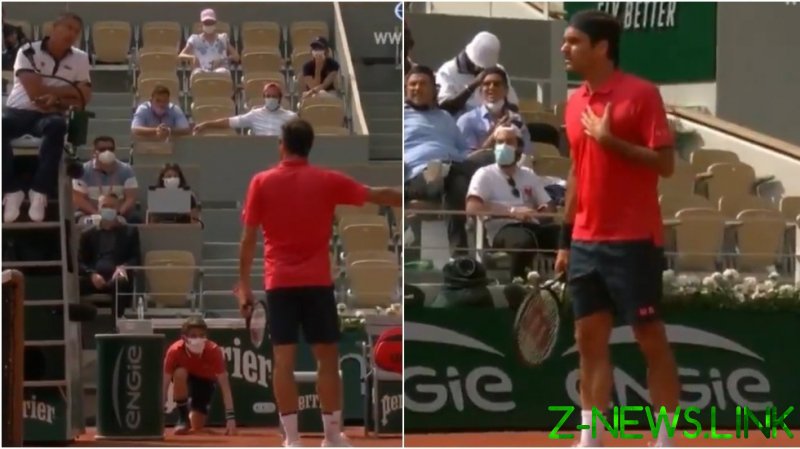 The eldest man at the Roland Garros aged 39, Federer had cruised when claiming the first set but the Swiss legend then found himself embroiled in a stern exchange of views with official Emmanuel Joseph as well as Croatian rival Cilic.

The incident came in the second set when Cilic let Joseph know his unhappiness with how long Federer was taking to retrieve his towel point-after-point.

Receiving a warning from the French official, the 20-time Grand Slam winner exploded while appearing unfamiliar with new rules that prohibit ball boys and girls from giving players their towels due to missing most of 2020 through a knee injury.

“I thought…,” Joseph said in his mother tongue.

“..But you think wrong.. Like you thought wrong just before!” Federer interrupted.

“I listened when you were speaking to me, now listen to me when I’m speaking to you,” he demanded.

“Am I playing too slow?” Federer was then heard asking Cilic.

“I’m going from one corner to the next, I’m not doing it on purpose.”

After Federer said he was fully aware of the rules, Cilic replied: “You were not playing too slow but, on a few occasions, I was waiting for you…

“That’s fine [getting your towel] but, I mean, you’re playing like this all the time…”

Losing the second set after losing his head, Federer recovered well to rally to a 6-2, 2-6, 7-6 (7-4), 6-2 win over Cilic, and therefore notched back-to-back match triumphs for the first time since competing in last year’s Australian Open.

“I had very good moments, in the tie-break in particular, and I served really well to finish,” remarked the 2009 champion afterwards.

“It shows me that I still have something in the tank, it’s super important for confidence.”

Elsewhere in Paris, Russian star Daniil Medvedev was impressive when putting away Tommy Paul, with the official French Open social media accounts remarking he looked “comfortable on the red clay” – a somewhat unlikely scenario given Medvedev’s infamous struggles on the surface in years gone by.

“I know I’m capable of doing big things,” the 25-year-old and number two seed – who will face Reilly Opelka next – stressed.