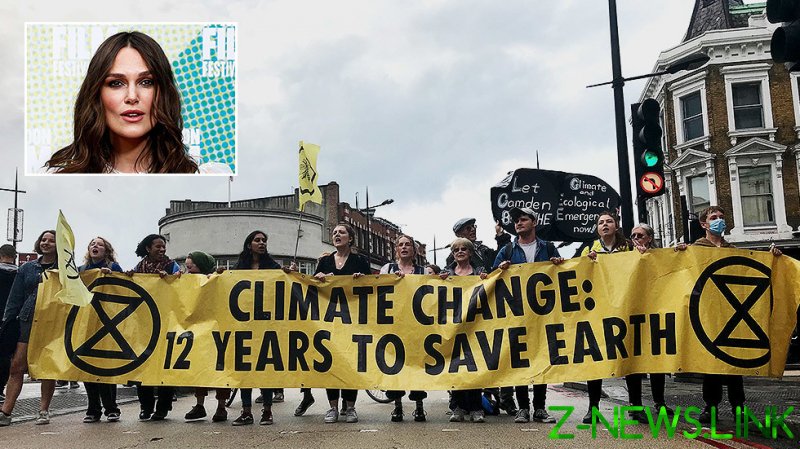 Because if Serena Schellenberg, age 59, was equipped with a clearer understanding of the need for critical analysis, particularly in the climate change minefield, maybe her rookie error of producing an Extinction Rebellion campaign film based on totally bogus information could have been avoided.

But then maybe critical thinking isn’t her strong point. According to Tatler magazine last year, like other ‘Tatler Types’ in Extinction Rebellion interviewed by the magazine – I know, I know! – Schellenberg “goes to youth strikes with her (privately educated) nieces and nephews. “Because that’s where my connections are – not with my own generation”.’

Anyway, despite her obviously right-on credentials, she’s had to back down from two of the more apocalyptic suggestions made in her remake of last year’s Climate Crisis and Why We Should Panic – a 12-minute XR campaign promo video – because, not to put too fine a point on it, those claims are utter bollocks.

“Scientists warn that human extinction is a real possibility,” a closing slide on the film declares. Er, no they don’t. Then another states, “Climate breakdown is already killing 400,000 people every year.” Umm, not true either.

It’s not as if these allegations were shot down at a heavyweight world forum on the environment, where climate change experts argued back and forth over the veracity of data and its interpretation. No, all it took for these bogus ideas to be refuted was the request from a newspaper for the lunkhead producer to identify her source.

In back-pedalling like a Tour de France in reverse, Schellenberg said: “Since these statements still prove to be a matter of debate and we would like the film to be robustly backed by the Scientists of XR [Extinction Rebellion], we have decided to review these statements and update them for the relaunch of the film.”

Talk about an own goal. The timing of this easiest of easy takedowns comes on the eve of the film’s re-launch, which was supposed to signal the start of a weekend of Extinction Rebellion protests attracting widespread media attention. It has certainly drawn attention, but for all the wrong reasons. For many on the climate change frontline, the apocalypse is just around the corner and they use fear to sell that idea.

Thunberg already has a date in mind. “Around 2030 we will be in a position to set off an irreversible chain reaction beyond human control that will lead to the end of our civilization as we know it,” she wrote in last year’s  No One Is Too Small To Make a Difference.

So 12 years to doomsday. Or maybe 11 now. And she’s not the only one spouting this line. Rising star in the US congress, the telegenic Alexandria Ocasio-Cortez, must have the date marked on her calendar too, because she’s claimed, “The world is gonna end in 12 years if we don’t address climate change.”

It’s not, and these people should know better than to spurt out such headline-grabbing garbage. Because they undermine the efforts of serious people with solid arguments and you end up with a probing inquisitor, like journalist Andrew Neil, forensically dismantling an infantile argument, humiliating the subject of his interrogation and making a laughing stock of one side of the debate.

And while our film-making friend, Ms Schellenberg, has backtracked over the claims that humanity faces impending annihilation and re-edited the video to replace the two claims mentioned, in an attempt to retain some sort of credibility, there has been collateral damage.

Hollywood star Keira Knightley – yep, Elizabeth Swann of Pirates of the Caribbean is a climate activist – provides the voice-over for most of Schellenberg’s film and okayed its full content before release, according to the producer. Facing huge embarrassment over this shambles, for not doing her homework, Knightley may think her latest outing makes her 2007 flop, Silk, with its miserable score of 7 percent on Rotten Tomatoes, seem like an Oscar winner. Even if it is a love story set in the silkworm industry.

Like most earnest luvvies who venture off-piste, she should have stuck to the dress-ups and funny accents because putting your credibility on the line in an unfamiliar role is not good for your career.

And in this case, the attention earned through her involvement with Serena Schellenberg’s ill-conceived film hasn’t helped the cause.