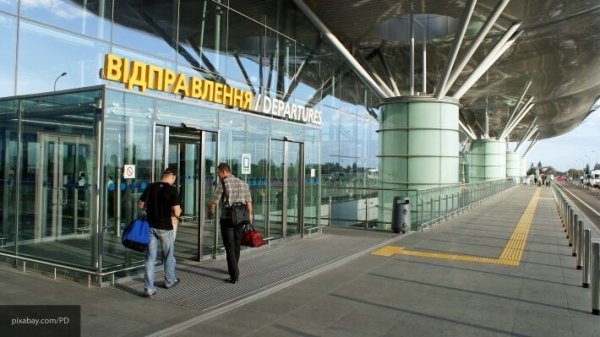 The crowd evacuated Ukrainians arriving on 29 March from Vietnam at the airport “Borispol”, have broken through the cordon Sanitaire. People do not want to undergo observation and began to break out of the airport building. Video with a crowd of angry tourists hit the net.

The video Ukrainians fight to burst through the crowd of medics in protective suits and pushing a locked door. People scream about violation of their rights, one even called “Nazis” those who do not miss. On the scene arrived police and the national guard, but even that did not help to contain the crowd.

One of the evacuees removed the process of returning to Ukraine. In the video the guy showed how people leave the plane. In the airport terminal crowd was crammed with Luggage evacuated, then in the frame appeared the crowd that tried to break through to the exit.

“We are illegally detained in the territory erupts,” says the young man.

Also several times he rudely spoke about Ukraine, which has angered his countrymen. In the Network on the young man barrage of criticism that forced evacuated from Vietnam to apologize. The first insult of Ukraine drew attention to the Nikolaev journalist Oleg Derenyuga. He found out the Ukrainian identity – it was 29-year-old Jaroslav IIIC.

“He, along with other passengers heroically “broke through the defense“, and then successfully told his followers that returned to <…> and are unhappy that their Board met with the measures of quarantine, “protested Derenyuga.

According to the journalist, the flight from Vietnam was completely free for the evacuated Ukrainians. It was organized by the Vietnamese businessman to evacuate Vietnamese from Ukraine. Indicates that the Ukrainian Embassy in Vietnam managed to negotiate the return of the Board of Ukrainian citizens. A condition of flight was an agreement on a two-week quarantine in one of the hotels in Kiev region and the contribution of 200 euros per person on its provision. Derenyuga said that initially evacuated allegedly agreed, but upon arrival he changed his mind.

Today, Jaroslav IIIC deleted the video, which depicted his return to Ukraine and published the video message of apology. According to him, the statement he made on emotions after a long flight.

“I saw a huge number of views and negative comments. I’m already home. I understand that we all see. <…> But Ukraine is so-so proved. Permission to depart has come with the caveat that perhaps we are put on visual observation”, – said Yaroslav.

“With respect to the phrase about Ukraine – it has been said on emotions after a long flight. I actually consider Ukraine their Fatherland and love it. Why back. To wait out adversity a much nicer home. And I want to apologize to anyone I may have offended or hook. It’s not an appropriate phrase. Especially here it has been taken out of context and looks superbase”, apologized IIIC.