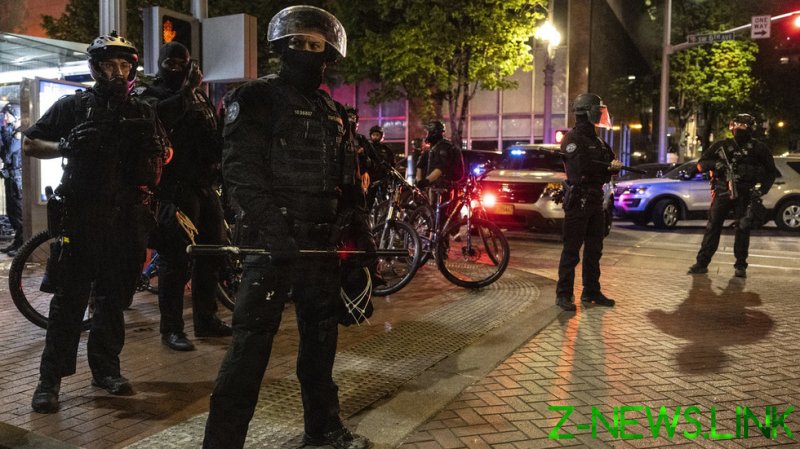 The Police Bureau’s Rapid Response Team self-imploded on Wednesday, after around 50 police officers, detectives, and sergeant members of the squad voted to leave it, Acting Portland Police Chief Chris David confirmed on Thursday.

The mass exodus was sparked by the indictment of one of the team’s members, officer Corey Budworth, on fourth-degree assault charges in connection with an incident during a declared riot on August 18, 2020.

Budworth was captured on video pushing a woman to the ground and then hitting her in the face with a baton. The woman, who was later identified as freelance photojournalist Teri Jacobs, can be seen wearing a badge and has a camera dangling from her neck in the clip.

It’s not clear from the video what preceded the altercation, but police can be heard announcing through a loudspeaker: “Officers are taking lawful action. Stay on the sidewalk,” as Jacobs falls to the ground.

The Portland Police Association dismissed the charge as politically motivated, with Daryl Turner, the executive director of the association, arguing that Budworth was simply “doing his job,” trying to protect civilians, police officers, and city property from the angry crowd. Turner insisted that the officers were following instructions, accusing the city and the District Attorney’s Office of turning their backs on the police and refusing to bring charges against the rioters.

He argued that by banning the use of crowd control means such as tear gas, the city, contrary to the desired effect, forced the officers to resort to more heavy-handed methods.

“During these protests, our hands were tied to what we could do, if we were using CS gas we wouldn’t have to worry about the hands-on approach or less-lethal impact munitions,” Turner said on Wednesday.

At least one more member of the now-dissolved squad is facing legal repercussions for his actions during the months-long unrest. On Wednesday, the Multnomah County District Attorney’s Office confirmed an investigation into the use of force by Detective Erik Kammerer. A city resident accused Kammerer of beating him up in a case of mistaken identity, with the alleged victim claiming he was taken for a rioter.

While the officers have left the Rapid Response Team, they will remain with the force and keep their regular duties.

A spate of violent protests plagued Portland last summer, sparked initially by the police killing of George Floyd in Minneapolis, Minnesota. The riots saw demonstrators setting fire to buildings, including a police precinct and the police union headquarters, throwing rocks and other objects at officers, as well as erecting barricades and establishing an ‘autonomous zone’. While the violence has since subsided, the protests continued past the inauguration of President Joe Biden.