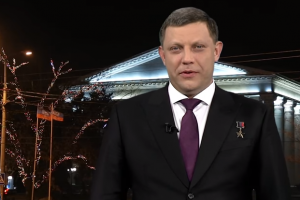 Zakharchenko tried to repeat the “entourage” of Putin.

New year’s eve the so-called “people of Donbass” watched on local TV the greetings of the leader of fighters “DNR” Alexander Zakharchenko.

In his speech, the leader of the terrorists said that “DNR” allegedly “fighting for peace”.

“On the eve of the New year I’m not going to talk about the war. For all of us war has become commonplace. Today I want to talk about in the world, because the world is what we fight, work, build and restore, despite the war,” said Zakharchenko, noting also certain “economic achievements” of the “Republic”.

The greetings of the leader of “DNR” commented the social, political analyst Alexei holomuzki.

“Zakharchenko on New year I tried: dressed under Vova H., von demanded to find similar it pushed for example Vova X. What will they do to stay in the same “place” seat. Although Carpenter did not help and remained in 2017,” wrote golobutsky.