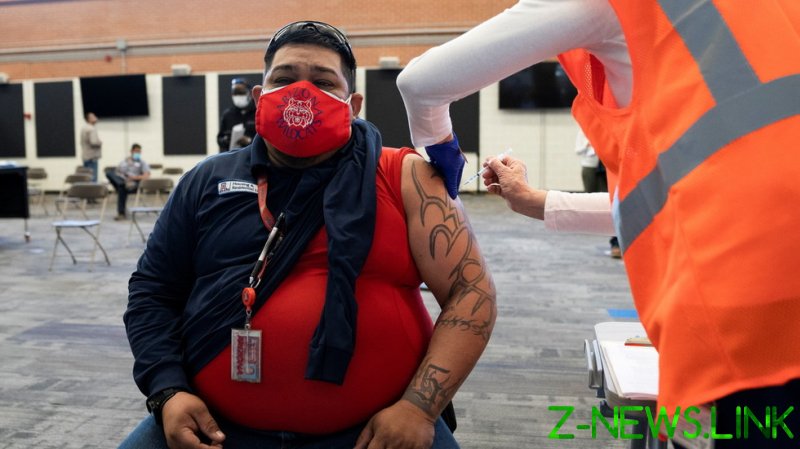 “Someone should introduce a bill mandating that you have to show your vaccination card to vote and watch everyone on the Left’s brain malfunction and explode,” Trump Jr. said in a tweet shared over the weekend by Democrat Super PAC ReallyAmericans.

While Trump Jr.’s post was clearly meant to poke fun at the Democratic Party’s seemingly supporting Covid-19 vaccine mandates set by businesses while pushing back against stricter voter ID laws put forth recently in states such as Georgia, liberals were quick to embrace the idea, taking it at face value.

Many supporters of the idea to link constituents’ vaccination status to their eligibility to vote cited the higher vaccination rates among those who identify as Democrats, already savouring the prospect of stripping Republicans who are not vaccinated of their voting rights.

Trump Jr. responded to the hashtag “#VaxtoVote” – kicked off by his tweet – by blasting supporters of the Democratic party for endorsing the restriction of the voting rights of people they disagree with, something that critics of new Georgia voting legislation have accused Republicans of doing.

A recent Washington Post-ABC News poll found that attitudes about vaccination in the US are largely divided along party lines. The poll, conducted between June 27-30, found that while some 86% of Democrats have received at least one Covid-19 vaccine shot, only 45% of Republicans have been inoculated with at least one dose. Some 47% of Republicans said that they might never get vaccinated.

Still, Don Jr’s “proposal” might not ring hollow among a sizable portion of his party’s supporters, as the GOP voter base itself appears to be split on the issue. A new survey by The COVID States Project showed that while about 64% of Americans favor a universal vaccine mandate, 45% of Republicans approve of the idea.