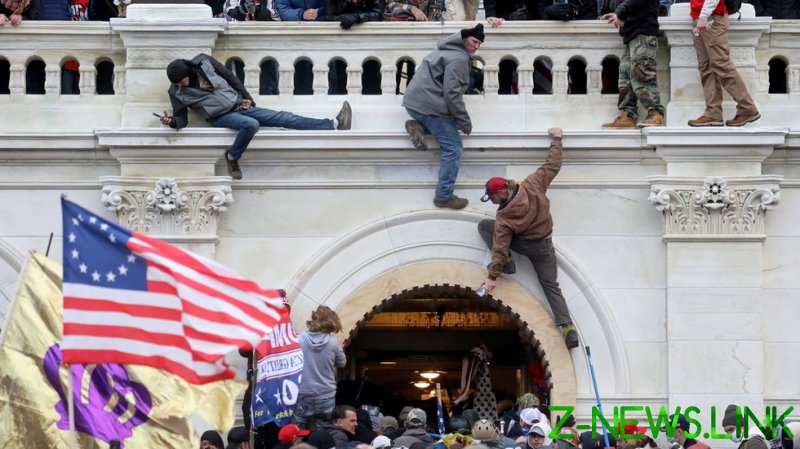 The DOJ filed a motion to dismiss the case on Tuesday, with assistant US attorney Tejpal Chawla asking the court to drop a criminal complaint against Christopher Kelly of New York City after no evidence turned up that the accused had entered the Capitol building.

“The government and defense counsel have discussed the merits of the case, and upon reflection of the facts currently known to the government, the government believes that dismissal without prejudice at this time serves the interests of justice,” the prosecutor wrote.

Arrested just weeks after unrest rocked the US Capitol last January, Kelly was charged with unlawful entry and obstruction of an official proceeding, among other offenses. While investigators were initially tipped off to Kelly’s potential involvement in the riot from a confidential informant, who forwarded a number of Facebook posts that indicated he was present for the incident, the DOJ has since concluded that he did not actually enter the Capitol building, according to a law enforcement official cited by Politico.

Kelly appeared in at least one photo on the Capitol grounds posted to Facebook, while another image seen on his account was captured inside the building but does not feature Kelly himself. A post reading “we’re in” was also reportedly shared to his Facebook profile during the unrest, however that was deemed insufficient to prove he personally entered the building.

“Since he was not inside, in the interest of consistency in the investigation, the charges were dropped,” the law enforcement official said, while DOJ spokesman Marc Raimondi told Bloomberg that the photo taken from inside the Capitol was not captured by Kelly.

Kelly’s is the first federal case to be dropped among the nearly 500 brought against suspected rioters. While breaching the police line around the Capitol was also technically against the law, the DOJ has largely focused its charges on those who entered the building itself.

Investigations into the riot have hit snags before, however, with the DOJ forced to backtrack after a federal prosecutor in Arizona claimed that rioters planned to “capture and assassinate” government officials in January. The explosive comments made headlines, but were later brushed aside by the acting US attorney in Washington, DC, who said no evidence of such a plot was ever uncovered.

The move to dismiss Kelly’s case also comes amid a push by Democrats and a handful of Republicans to launch a 9/11-style commission to investigate the events on January 6. The effort has faced opposition within the GOP, however, seeing Republican Senators vote to block a bill to set up the probe last week. The legislation would establish a 10-member commission, similar to the one created to investigate the terrorist attacks in New York, Washington, DC and Pennsylvania on September 11, 2001. While Democrats have insisted on the need for a Congress-driven probe, GOP opponents argue that federal and local police investigations into the riot are sufficient, having already pressed charges against hundreds of suspects around the country.