Home / WORLD / ‘Doesn’t want America TO BE A NATION at all’: Trump says Biden wants migrants to swamp US by ending ‘Reman in Mexico’ rule

‘Doesn’t want America TO BE A NATION at all’: Trump says Biden wants migrants to swamp US by ending ‘Reman in Mexico’ rule 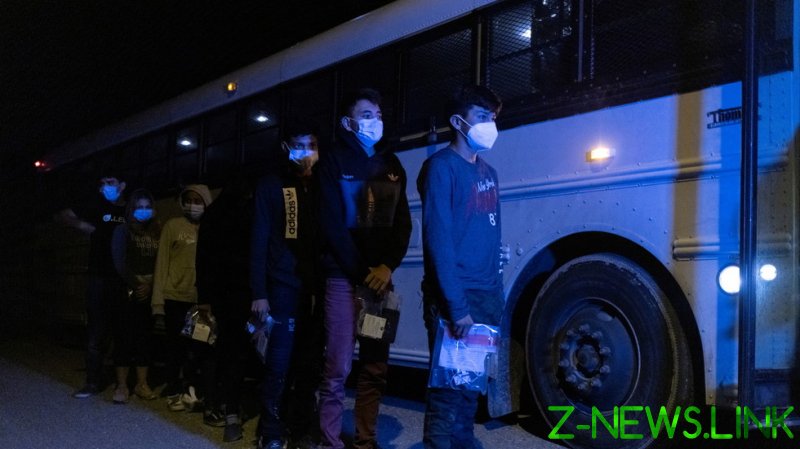 “Joe Biden is the first American president who doesn’t want America to be a nation at all,” Trump said in a scorching statement issued on Wednesday. He added, “Our country is being destroyed before our very eyes.”

The statement came one day after the Biden administration formally ended the Trump-era “Remain in Mexico” program, which forced asylum seekers arriving at the southern US border to stay in Mexico while waiting for their cases to be adjudicated in immigration court. Trump credited the initiative, also called Migrant Protection Protocols (MPP), as “one of the most successful border security programs anyone has ever put into effect anywhere.”

But Department of Homeland Security (DHS) chief Alejandro Mayorkas said in a memo on Tuesday that MPP didn’t “adequately or sustainably” enhance border management and that retaining the program wouldn’t be consistent with the Biden administration’s “vision and values.” He previously condemned the “cruelty” of Trump’s border policies.

The new administration paused MPP when Biden took office in January, pending a DHS review of whether to terminate or modify the program, and allowed 11,200 asylum seekers who were awaiting their immigration cases to enter the US.

Trump argued that along with asylum reforms, expedited removal procedures and cooperation agreements with Central American countries, MPP helped secure the border and end the practice of “catch-and-release.”

After Biden began dismantling Trump’s policies almost immediately upon taking office, border crossings surged to a record high. Although the border was officially closed amid the Covid-19 pandemic, in practice, about 65 percent of families and 15% of single adults are still released into the US to await their immigration cases, according to the April figures by U.S. Customs and Border Protection.

Biden allowed all unaccompanied minors to stay. The number of child migrants arriving without their parents then surged to unprecedented highs, and the administration’s inability to process the flood of children led to deplorable conditions in border detention facilities. Ironically, Mayorkas blasted separation of migrant families as “the most powerful and heartbreaking example” of Trump-era cruelty, but Biden’s policies have caused families to voluntarily separate.

“The Biden administration inherited the most secure border in history, and they turned it into the greatest border disaster in history,” Trump said. “Our border is now run by cartels, criminals and coyotes.

“Illegal immigrants, gang members and lethal drugs are pouring across like never before. Not only are illegal immigrants being caught and released, they are being put up in hotels at taxpayer expense.”

Texas Governor Greg Abbott issued a disaster declaration on Tuesday, freeing up more state resources to combat “criminal activities stemming from Biden’s border crisis.” He said state troopers will enforce all federal and state laws along the Texas-Mexico border, including those against trespassing, smuggling and human trafficking. He also halted licensing of childcare facilities with federal contracts to shelter or detain illegal aliens.

“President Biden’s open-border policies have paved the way for dangerous gangs and cartels, human traffickers and deadly drugs, like fentanyl, to pour into our communities,” Abbott said. “Meanwhile, landowners along the border are seeing their property damaged and vandalized on a daily basis while the Biden administration does nothing to protect them.”