Home / WORLD / Delayed reaction? Trump’s media foe The Atlantic calls to ‘end’ Nobel Peace Prize after his nomination, but not after Obama’s

Delayed reaction? Trump’s media foe The Atlantic calls to ‘end’ Nobel Peace Prize after his nomination, but not after Obama’s 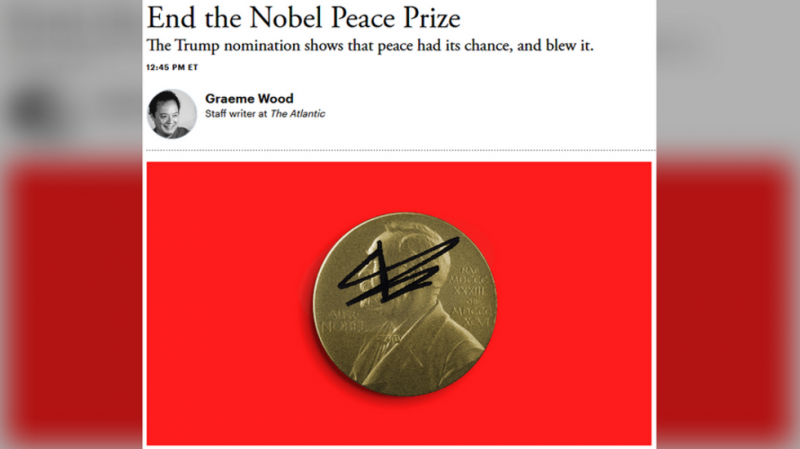 “End the Nobel Peace Prize,” The Atlantic declared in a headline on Friday. The award’s past winners have a “spotty” record of achievement, the media outlet said, as many were honored for making efforts at peace that never came to fruition. Trump’s nomination was apparently the last straw for The Atlantic, which said it “shows that peace had its chance and blew it.”

Atlantic writer Graeme Wood opined in the article that “Trump’s main diplomatic maneuver is to adopt a lickspittle posture toward authoritarians, promising them decades in power in return for a smile and a condo development. Peace does not mean a web of personal agreements between rich psychopaths.”

While it’s so far unclear how the freshly-signed deal between Israel and the the United Arab Emirates and the soon-to-be-inked one between Israel and Bahrain will work out, or whether the “peace deal” between Serbia and Kosovo will hold for long, Trump has already earned two nominations for the prestigious award, from a Norwegian and a Swedish MP respectively.

The Atlantic argued that it remains to be seen if any of these endeavors will bear fruit and not flop, as this is precisely what had happened to equally well-intentioned accords involving Israel in the past. But some critics have pointed out that the publication was not so categorical back when former US president Barack Obama received his Nobel Peace Prize in 2009, based more on his campaign promises than any real accomplishments.

After receiving his Nobel, Obama started new wars and finished his last full year in office by dropping more than 26,000 bombs around the world and expanding the presence of US special forces to 70 percent of the world’s 138 nations, more than doubling the reach of the George W. Bush administration.

Although Wood acknowledges that Obama won the accolade “for his promotion of, notably not his success in achieving, ‘cooperation between peoples’” – and that instead of bringing peace, ended up “expanding America’s drone program” – the timing of The Atlantic’s vitriolic piece has prompted questions whether its demand to the Nobel Committee has more to do with the outlet’s well-known distaste for Trump, rather then any genuine concern about the award’s reputation.

White House communications director Alyssa Farah was quick to jump on what she saw as The Atlantic’s predictable reaction to Trump being nominated for a second time, tweeting: “Shot, chaser.”

Other critics, such as author Geoffrey Miller, argued that the mainstream media wouldn’t acknowledge any positive achievement by the president.

“They would end the cure for cancer if Trump somehow got credit for it,” another commenter said.