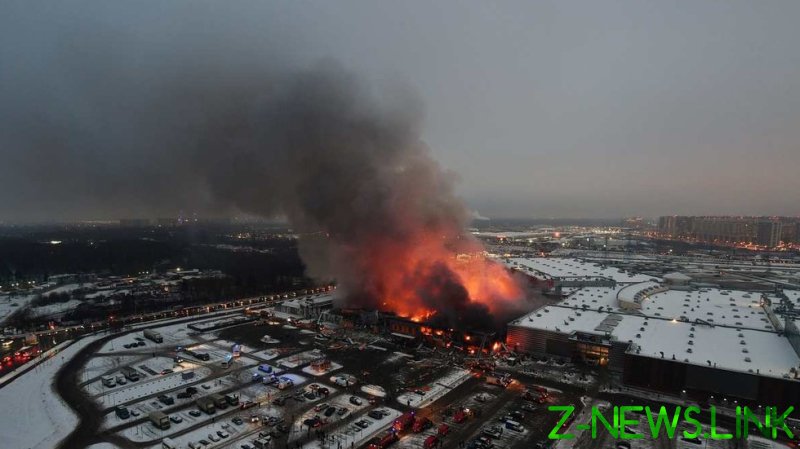 At least one person died on Friday in a major blaze at a shopping mall just outside Moscow, according to a top firefighting official. The inferno spread over some 7,000 square meters before rescuers managed to contain it, preventing damage to nearby buildings.

The fire broke out at the retailer OBI, located in the Mega Khimki shopping complex in Moscow Region, on the northern outskirts of the Russian capital. The fatality was confirmed to the media by Sergey Poletykin, who heads the regional branch of the Emergencies Ministry.

The victim worked at the mall, the region’s top prosecutor, Sergey Zabaturin, told journalists. According to some reports, he was a security guard.

Fire alarms went off at around 6:00 a.m. Moscow time (3:00 a.m. GMT), according to rescuers. While initially relatively small, the conflagration spread rapidly after causing a major explosion, which was filmed by witnesses.

OBI sells home renovation items, including highly flammable paints and varnishes, which were stored at a warehouse on the property.

There were initial concerns that the blaze would spread to other shops at the same location, which houses several major retailers. But firefighters managed to contain it in roughly two and a half hours after it was reported. By 10:45 a.m., firefighters had extinguished all visible flames, Poletykin said.

Nevertheless, all businesses in the complex will remain closed on Friday, with no reopening date scheduled, the shopping center management announced.

The building section where OBI was located was destroyed in the incident, with the roof collapsing and just the load-bearing framework left standing, according to media reports. Estimates put the damage at $300 million to $480 million.

The cause of the blaze is yet to be identified. Preliminary reports point to an electrical malfunction or negligence during welding operations, as possible scenarios, rescuers said.

The shop was formerly German-owned, but was sold to domestic operators earlier this year due to the EU’s anti-Russia sanctions.