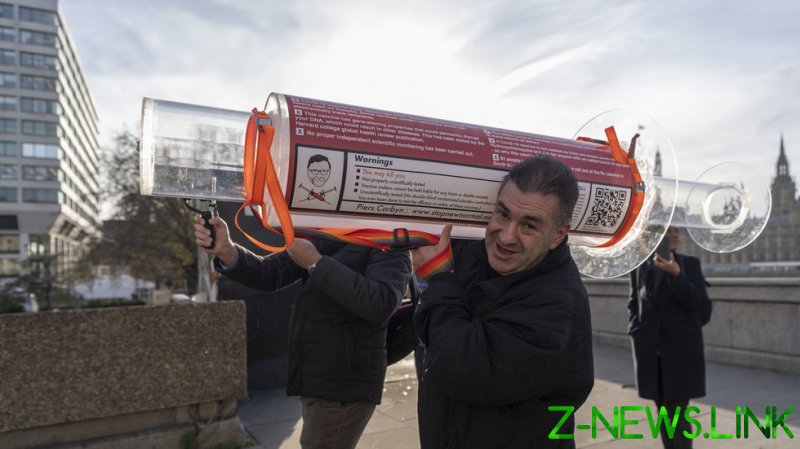 BIG government wants to know my every move. ‘THEY’ will do everything in their power to get their microscopic probes into every nook and cranny of my life. Not only is Big Brother watching, he actually wants to get INSIDE me!

Yesterday I went to the supermarket and to the photocopier place to get some photos printed, then I came home, ate a sandwich and watched the Sopranos on HBO. Rock ‘n’ roll baby! Keith Richards and Johnny Depp have got nothing on me.

But if I’d had a Covid-19 vaccine, ‘they’ would know ALL about it. My every move! Every minute and every boring little detail of my life.

Or, at least that’s what rapper Kanye West and Trump’s truly scary one time lawyer Sidney Powell seem to think. Vaccines are not an attempt to curb the virus and get life back to some kind of normal, vaccines are a way for governments to spy on us all.

Kanye West, now come on let’s face it – he’s not the most balanced dude at the best of times – told Forbes magazine during his short-lived run for president last year that a coronavirus vaccine was “the mark of the beast” and then added “they want to put chips inside of us, they want to do all kinds of things, to make it where we can’t cross the gates of heaven.”

Lawyer Sidney Powell briefly joined Trump’s legal team claiming massive electoral fraud and promising to ‘release the Kraken’ to prove exactly that (the Kraken is the sea monster from Scandinavian folklore that ate its enemies). Needless to say, no Kraken ever emerged from the deep. Now she says ‘big government’ would split the US population into the vaccinated and the not vaccinated – the vaccinated being under permanent government surveillance. She tweeted: “This is more authoritarian communist control imported straight from #China.”

And lots of people on the Internet have decided there’s something dodgy about that Bill Gates bloke, other than the fact he’s a geeky billionaire with a weird voice. The co-founder of Microsoft doesn’t want to do a bit of good with all those billions of dollars he made from Windows, Word and the Xbox. He doesn’t want to wipe out polio and malaria, if he can. No, oh no. He wants to monitor and, presumably, control everyone’s life.

But, hang on a sec, slow down … why? That’s a little word but it’s a huge question… WHY?

Listen anti-vaxxers and conspiracy theorists, I don’t mean to burst your social media bubbles, but really – honestly – you’re not that interesting.

Imagine the deep level of utterly secret intergovernmental collaboration that would be required? It took four years to negotiate fish quotas after Brexit.

It’s like all those JFK assassination conspiracy theorists online. Almost 60 years and generation after generation of the world’s best investigators, journalists and the biggest of brains plus Hollywood director Oliver Stone couldn’t disprove the official line on who shot President John F Kennedy. No. But along comes Chuck from Wisconsin with his internet connection and… Bingo! Chuck’s cracked it … JFK committed suicide!

Here’s a quick test, a question with a digital pat on the back for anyone who can guess the answer.

What have the people who reckon Donald Trump was robbed of the presidency in a massive – yet invisible and unsubstantiated – fraud got in common with the people who think a vaccine is a quest for government control?

Everything. They’re the SAME people.

You can bet your bottom dollar that a sizable slab of those folks who ran amok in the Capitol are among them. They might have been wearing face paint and horns but don’t be fooled; these folks were actually America’s brightest and most polished minds. The USA has more Nobel prize winners than any other nation, by far, remember.

As these mighty warriors climbed and scuttled around howling about freedom, they didn’t get the irony that it was the political system they were denigrating that had actually provided them with the freedom to be so absurd. And it seems some of these mask-free morons breathed Covid-19 everywhere, at least three lawmakers have since tested covid positive.

It’s not just the Americans though, oh no.

It’s the French too. France was the home of Louis Pasteur, the man who actually invented the first vaccine – against rabies. Funny that. Rabies is a disease you don’t hear so much of, these days. When was the last time you saw a rabid man running naked down your street?

A recent opinion poll found that only 39 per cent of French people said they’d get the vaccine (as compared to 80 per cent for Brits and 47 per cent for Americans).

Some wealthy folk are heading in the opposite direction, by spending £25,000 on a special concierge service to fly to the United Arab Emirates or India just to jump the jab queue.

Personally, I would prefer to wait a wee while. I hate needles. At least I didn’t have to go first, though. That nice old dude Joe Biden did. If the incoming president and thousands of others start to inflate or their heads go green – then you can be sure something’s gone horribly wrong.

It’s the speed of the testing regime and approval that could be a mild worry, not some moronic assertion about micro chips. Think about it, what else can the world do? Do you want to go out for a beer again with your mates or what? Do you want to dance around your hand bag in a packed nightclub? Go and watch a football match?

Yet it would be very wrong to actually force anyone to have a vaccine against their will. It’s also very wrong to stop people having their view about vaccines online, even if it does fly fully in the face of science. There are at least 31million people who follow anti-vaccine groups on Facebook, and there have been – of course – calls for them to be booted off social media, a la Donald Trump.

So, I can see the risk from a medical cock-up. But Big Government or Bill Gates planting a microchip? Nah. That’s absolutely and utterly ridiculous, bone-headed. Just get off the web for an hour or two, Chuck, and go out for a walk in the fresh air. You could even eat out, McDonald’s and Burger King are still open in your neck of the woods.

There can really only be one reason Bill Gates or Bill Clinton or Betty Boo or Bugs bloody Bunny would ever want to get a chip into your brain and that’s … advertising. To sell you crap you don’t need and never knew you even wanted.

On that note, I’m off to the shops…