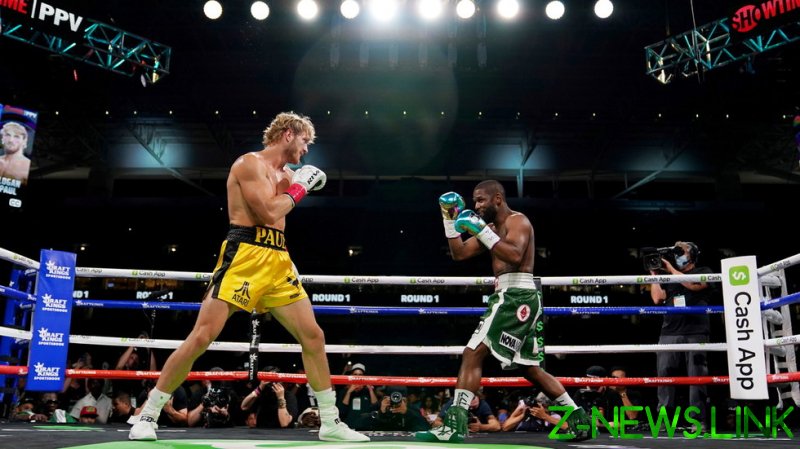 When Mike Tyson and Roy Jones Jr fought last year, there were justifiable concerns that two men closer to pensionable age than the peaks of their celebrated careers would carry out concussive damage on one another.

Tyson, with his instinct for ring brutality, came under the more specific scrutiny, with worried state commissioners eager to offer assurances that no knockout would be allowed or forthcoming in an exhibition designed to please nostalgics rather than anyone baying for blood.

The same could not quite have been said of Sunday’s festivities in Miami. At times, watching Logan Paul and Floyd Mayweather engage in their strange staccato dance, it seemed pertinent to remember that telling blows were allowed, if only in the hope that one or two might be forthcoming, albeit preferably without the kind of lasting damage that would raise more stern words about the danger of mismatches.

Anyone familiar with Mayweather’s time-honored tactics, helping him build his Rolls Royce-lined mystique while dodging and dismantling some of the most feared fighters in boxing, expected a fairly exact pattern to prevail after the first few minutes.

With his significant size advantage, Paul’s only chance of laying a glove on the defensive destroyer was a puncher’s one. As his early attempts whistled through the air to the sound of sharp breaths and coos from a colossal crowd who sounded like they were watching a briefly effervescent fireworks display, Mayweather was surely sizing up his prey, coiling behind that slick one-man fortress that he innately puts up while deducing when to venomously strike.

The seemingly inevitable never arrived. The master spoiler withheld his sting, later claiming that he could not deliver his hallmark counters to conclusive effect, so tied up was he by the 53rd opponent of his career and a man with next to no professional combat experience.

Mayweather hinted that 21 years in the game had caught up with him afterwards. A more likely interpretation is that those decades had left him entirely unbothered about doing anything as exertive as pushing for the finish on a frivolous night in the scheme of his grand achievements.

Ricky Hatton was incensed. Francis Ngannou made a sensible, opportune point about fighter pay that was also entirely unrealistic, given what sells to non-traditional fight audiences.

If novelty fights represent the gravy train, the key on Sunday night was to avoid any derailing. Few outcomes would have simultaneously pleased cynics and the reputed 60,000 people who swelled the massive setting, but a farce too stunningly overt – a 30-second knockout, say – could have jeapordized the appeal and marketability of these promotions and their vast revenues in the future.

His brief battering of kickboxer Tenshin Nasukawa in Japan in 2018 may have given Mayweather a sense of where the edge of public gullibility – hard as it can sometimes be to detect – might lie. On that odd occasion, there was an unedifying element to watching the helplessness of his eager opponent as Mayweather grinningly stalked him around the ring for a couple of minutes, like someone stepping back in front of a punch machine, in a contest that was clearly over almost as soon as the first bell rang.

Better to create an air of smoke and mirrors, then, instead of a definitive conclusion. It is unlikely that Hatton, Ngannou and even an apparently thrilled George Foreman – one of the only prominent voices to claim they had been impressed by the spectacle, bafflingly arguing that it had been utterly compelling – would have felt minded to do so much as discuss the validity of the event had it not played out as it did.

What we got was a manufactured element of surprise that left no-one entirely sure what they had witnessed or how to assess it. Two days on, an event containing a fight that will be forgotten next week continues to trend in a way that would be impossible to imagine on almost any regular fight weekend. In a post-merit system where fighters are absolved of the need for sincerity in efforts or words, the fans who booed may just have done so knowing that they are part of this meta juggling act.

The fact that the fight itself could probably have continued for another 50 rounds without anything of substantial note happening is both irrelevant and symbolic of the reality that the sport is secondary to the showbiz. There was precious little style or substance, just two experts in a culture obsessed with the cult of personality cashing in on an opportunity with the minimum of drama in the ring.

Mayweather sounded like a reluctant party guest coerced into being polite about his hosts in his post-fight interview. Paul can add going the distance with a sporting great to his ever-growing list of dead-eyed stunts, and his opponent’s delivery of the best line of the night, claiming that he had been involved in an organized robbery, embellishes the storyline of latent villainy that both frequently like to add to their brands. Expending more effort on wondering how it happened is pointless: there will be more nights like this, and inscrutability is a mark of their success.