‘Craving a vegan sausage roll now!’: Anti-vaxxers go plant-based as law firm says it could be illegal to force Covid jab on vegans 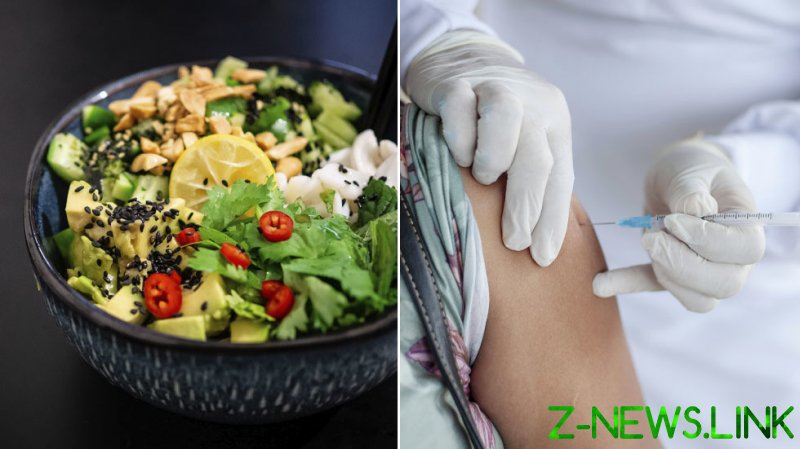 On Thursday, law firm Lewis Silkin told The Telegraph that it was likely ethical vegans would be protected by employment law if employers were to implement rules mandating vaccinations for their staff.

The firm said that “some ethical vegans may disagree with vaccinations on the basis that they inevitably have been tested on animals,” adding that ethical veganism has been found to amount to a belief by employment tribunal.

Lewis Silkin’s legal advice has been welcomed by many vaccine sceptics, who remain fearful of the widely administered and lifesaving shots.

“Became vegan overnight, since hearing about exemption from vaccines,” one person said on Twitter, while another wrote, “Hmmm I could kill for a cucumber sandwich right now,” adding that a “juicy smoky bacon sandwich” doesn’t sound so good anymore.

Others said they now had cravings for vegan sausage rolls while some presented more serious arguments, demanding, “why aren’t my beliefs in natural immunity and health protected?”

Several people suggested that the number of vegans in the country would swell following the legal advice.

Noting all the vaccine sceptics vowing to adopt a plant-based diet, one person joked, “And suddenly all us ‘antivaxxers’ are like this doesn’t taste too bad,” sharing a meme of someone scoffing grass.

Some people were clearly upset by the reaction to The Telegraph story. While many claimed that most vegans were probably in favour of taking the shot, one noted, “the most important aspect of veganism is the overall reduction in suffering, If you are also vegan or vegetarian, PLEASE get the vaccine.”

Another branded the comments “depressing,” claiming that anti-vaxxers can’t even “empathise with a human being let alone an animal.”

Others said they didn’t understand the debate, adding that very few people were actually ethical vegans. “It’s a vaccine. You’re not injecting a hamburger,” one person stated.

In recent months, a number of British firms have announced plans to implement a “no jab, no job” policy. Several bosses have claimed that their company’s ability to offer their services safely would be compromised if their staff weren’t inoculated against Covid-19.

Outspoken Pimlico Plumbers boss Charlie Mullins said on Wednesday that he’d be willing to go to court to defend his vaccine policy, which is due to come into force in September.