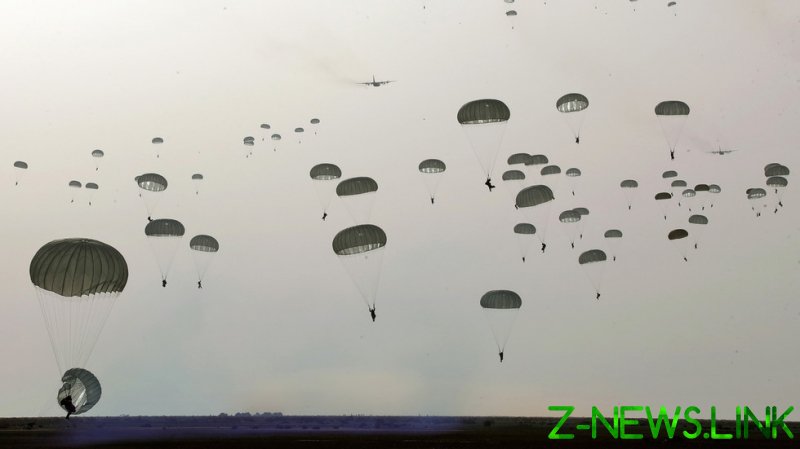 The exercise, dubbed ‘Eqtedar 99’ (‘Power 99’) kicked off in southern Iran close to the mouth of the Gulf early on Tuesday. The war game was organized by the country’s army ground force, supported by air force and aviation units.

“Today, the Ground Force has achieved considerable operational capabilities in the fields of drones and missiles,” Deputy Commander of the Iranian Army Brigadier General Mohammad Hossein Dadras has said as quoted by local media. “The power and capabilities of the Army’s Ground Force in responding to threats will be demonstrated during Eqtedar 99 drill.”

Footage of the exercise, released by Iranian state media, shows commandos disembarking from helicopters in the desert, and a large paratrooper unit dropping from transport planes, with mechanized units providing support to the airborne infantry.

In recent weeks, Tehran has held a series of various exercises that involved different units of the country’s military. Last week, Iran’s elite Islamic Revolutionary Guard Corps (IRGC) held a two-day war game, focused on ballistic missile and kamikaze drone use. The missiles were launched at ground targets, as well as destroying mock warships located some 1,800km away from the launch point.

“The recent war games show to enemies the Iranian nation’s will to defend its independence and territorial integrity,” the IRGC’s commander General Hossein Salami told state TV in the aftermath of the drills. “Our fingers are on the trigger on behalf of the nation.”

International tensions have been particularly high in the troubled waters of the Persian Gulf lately. The escalation followed the seizure of a South Korean tanker by the IRGC, due to the alleged “oil pollution” it presumably produced. The incident prompted the US to deploy a submarine into the Gulf, as well as to reverse its decision to pull the USS Nimitz carrier group from the Middle East.