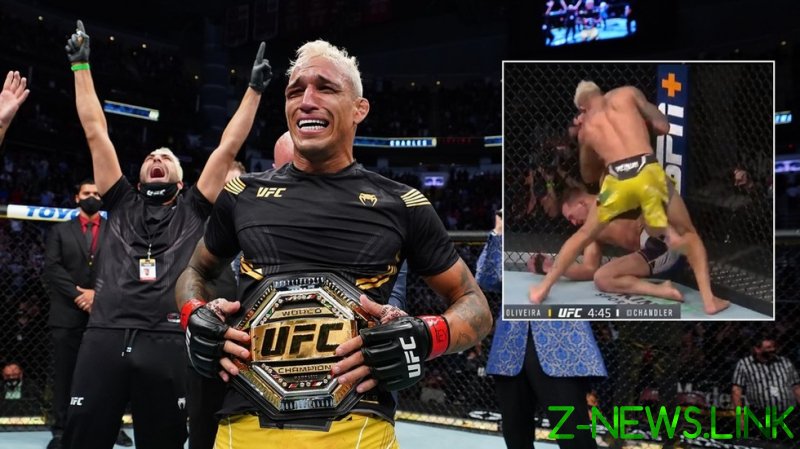 A veteran of 11 years in the UFC, Oliveira finally ascended to the top of the pile at 155lbs with a remarkable recovery from a first-round onslaught before finishing Chandler with a barrage of blows early in the second round at the Toyota Center.

The Brazilian, 31, captured the title formally vacated by retired Russian legend Khabib Nurmagomedov earlier this year as a new era began in the UFC’s lightweight ranks.

“I deserve it and I wanted to show that I’m the best in this category,” said an emotional Oliveira after having the belt wrapped around his waist. “I’m proving to everybody I’m the lion of lions.”

‘Do Bronx’ made his UFC debut as a 20-year-old and has needed 28 fights to finally get his hands on gold – beating the previous record tally of 26 bouts taken to win a title set by Michael Bisping.

With his stoppage of Chandler, Oliveira also set a new outright record of 17 finishes in the UFC.

The manner in which he did so showcased Oliveira’s resolve, as despite some success on the ground he had looked in serious danger of being finished during a first-round onslaught from the heavy-hitting Chandler.

Oliveira survived until the bell and in the end it was the Brazilian’s power on his feet which proved most telling, as he set up his finish with a big left hand early in the second round, dropping Chandler and raining down further blows on the fleeing American before the contest was waved off.

For former three-time Bellator MMA champion Chandler, who was aiming to claim a UFC title after only making his debut in the promotion in January, it was a bitter finish in front of a fiercely partisan crowd in Houston – but he praised his rival and vowed to bounce back.

“He’s the real deal, take nothing away from him, [but] I promise you I’ll win that strap within the next 12 months. We’ll get this one back,” said the 35-year-old star.

An ecstatic Oliveira had leapt over the cage and into the UFC commentary team on sealing victory, before going over to embrace promotion president Dana White in the cageside seats.

Fans, fellow fighters and pundits meanwhile were amazed at how quickly the fight had turned on its head after Oliveira had appeared overwhelmed in the first round.

“At Shoot Box, Macaco Gold Team, we have a saying, ‘It can rain stones, but the stones are gonna come back,’” Oliveira himself said of the reversal of fortunes in the contest.

Attention will turn to who the Brazilian faces in his first title defense, with the most likely candidate being the winner of the showdown between Dustin Poirier and Conor McGregor in Las Vegas on July 11.

Poirier turned down a shot at the 155lbs title in favor of a lucrative trilogy with the Irishman, and the man to emerge with his hand raised in their third contest will be tipped as the first up for newly-crowned king Oliveira.

Both Poirier and McGregor took the time to congratulate Oliveira, with the Irishman seeing omens in the fact that the Brazilian becomes the UFC’s 11th undisputed lightweight ruler.