Case Gandzyuk near the house of the Kherson officials staged 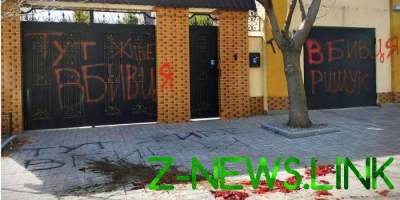 Activists picketed the house of the Deputy head of Kherson regional state administration.

The protesters wrote on the gate Here lives a murderer with red paint, and lit smoke bombs.

Behind the protest was observed by the police.

Recall that the suspect in the murder of Catherine Gandzyuk Alex Levin stated that the Deputy Chairman of Kherson regional state administration Eugene Reduc asked to “punish” activist.

The Prosecutor General’s office of Ukraine said that in the case of the murder of the activist Catherine Gandzyuk may be new suspects.

31 July 2018 Catherine Gandzyuk in Kherson doused with sulfuric acid. She received chemical burns over 35% of the body surface and died in hospital on 4 November.

The PGO suspects that, along with Levin, the murder of Gandzyuk also involved the Chairman of the Kherson regional Council Vladislav manger.