‘Can’t get it up (to orbit) lol’: Musk trolls Bezos (& his blue balls) as Blue Origin protests NASA moon contract award to SpaceX 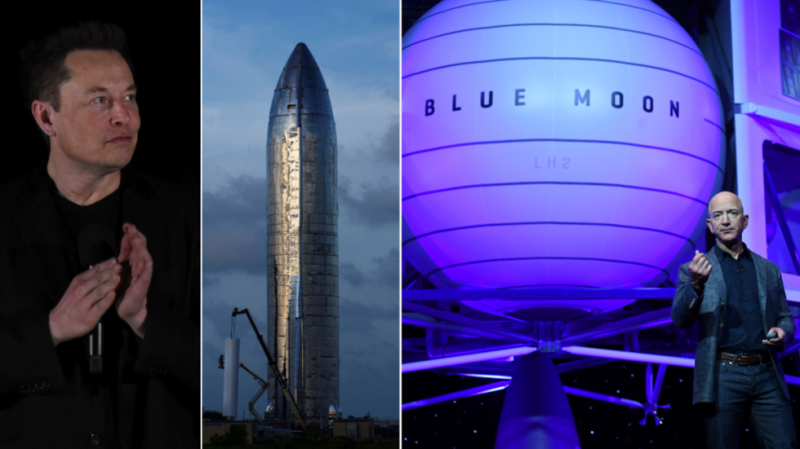 The SpaceX CEO took to Twitter on Monday night with a swipe at Bezos, responding to a New York Times report that his aerospace company Blue Origin had filed a complaint with NASA after the space agency awarded a $2.9 billion contract to construct a moon lander to Musk’s outfit.

“Can’t get it up (to orbit) lol,” Musk wrote suggestively, following up with an even more risque post refashioning Blue Origin’s name to “Blue Balls” with some crude Photoshop work.

Within hours, the first tweet racked up tens of thousands of likes, as netizens joined in with mockery along a similar theme – one referring to Amazon’s “spheres,” or geodesic dome-like structures the company constructed at its Seattle headquarters.

Others offered more serious commentary on the battle for the NASA contract, with many arguing SpaceX and its craft, Starship, was a better fit for the moon lander project.

“Yes NASA is taking a chance with SpaceX and starship. But wouldn’t NASA be taking a larger risk with [Blue Origin] that has yet to launch any orbital class rocket?” asked one observer.

In Blue Origin’s complaint to NASA, filed earlier on Monday, the company argued the space agency made flawed evaluations of the two companies’ bids, saying it misjudged the perks of its own proposal and ignored steep technical challenges SpaceX is likely to face.

“It’s really atypical for NASA to make these kinds of errors,” Bob Smith, Blue Origin’s chief executive, told the Times. “They’re generally quite good at acquisition, especially its flagship missions like returning America to the surface of the moon. We felt that these errors needed to be addressed and remedied.”

Another company vying for the contract, Dynetics, also challenged NASA’s decision, which it announced earlier this month, declaring SpaceX the sole winner of the bid war despite initially saying it could choose up to two companies.