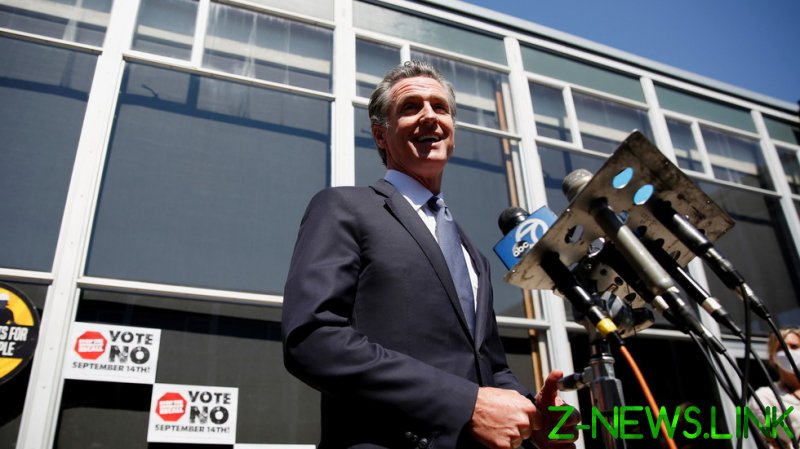 With more than 64% of the votes tallied, Newsom was expected to win Tuesday night’s recall race by a wide margin, according to projections by NBC, CBS, CNN and ABC.

Addressing supporters in Sacramento as the final results rolled in, Newson declared victory, saying he is “humbled and grateful to the millions and millions of Californians who exercised their fundamental right to vote, and express themselves so overwhelmingly by rejecting the division.”

Newsom took office following a 62% landslide win in 2018, but a segment of state residents have grown increasingly critical of his leadership, particularly surrounding his handling of the Covid-19 pandemic and associated government lockdown orders. In June 2020, retired Yolo County deputy sheriff Orrin Heatlie, along with his California Patriot Coalition and other conservative groups, launched the recall drive, quickly racking up hundreds of thousands of signatures and fundraising millions in donations.

While dozens of candidates stepped up to replace Newsom in the event the ‘Yes’ vote took the day, Larry Elder, a black conservative talk show host and supporter of ex-president Donald Trump, emerged as a favorite in polls. Newsom’s win was hard-fought, having poured millions into attack ads against Elder and other rivals while also rallying support from high-profile Democrats around the country, among them Massachusetts Senator Elizabeth Warren, who stumped for the governor in LA earlier this month. President Joe Biden himself also campaigned for Newsom, appearing at his side for a last-minute show of support in Long Beach this week.