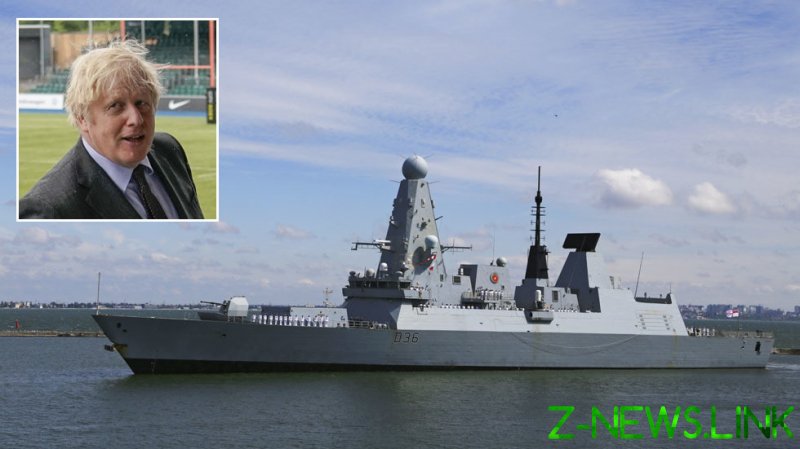 In a report released on Thursday night, the outlet – known to be close to Prime Minister Boris Johnson – alleged that Foreign Secretary Dominic Raab had “raised concerns” about the mission, proposed by defense chiefs, in advance. He was reportedly worried that the move could hand a potential victory to Moscow.

The account of events claims that Johnson was ultimately called in to settle the dispute. The Type-45 destroyer HMS Defender was given its orders on Monday, ahead of a clash with the Russian navy and air force two days later.

Moscow says that the warship crossed into its sovereign waters, and was intercepted by vessels and jets that ordered it to turn around. Officials add that warning shots were fired before the British sailors left the area. London, however, refuses to recognize the Russian claims, insisting that Crimea and the surrounding sea is rightfully Ukrainian territory and that its mission was in accordance with international law.

Reports from journalists aboard the HMS Defender indicated that the face-off with Russian forces was anticipated, and designed to send a message to the Kremlin. According to one reporter, “increasingly hostile warnings were issued over the radio” by the coast guard, including one that cautioned, “If you don’t change course, I’ll fire.”

The question of whether warning shots were fired proved contentious in the immediate aftermath. Raab said that Russia’s version of events, which claimed its vessels used their cannons to signal their intentions to intercept the ship, was “predictably inaccurate.” Instead, UK officials said, they believed Russian sailors had simply been conducting exercises nearby. However, Moscow released a video on Thursday in which confirmed the strongly worded radio messages and appeared to substantiate the fact that shots were fired.

Russia summoned the British ambassador, as well as the nation’s defense attache in Moscow, over the incident earlier this week.