Home / WORLD / Book describes General Milley as hero who saved US from Trump, but actually shows him colluding with CIA, NSA, Pelosi & China

Book describes General Milley as hero who saved US from Trump, but actually shows him colluding with CIA, NSA, Pelosi & China 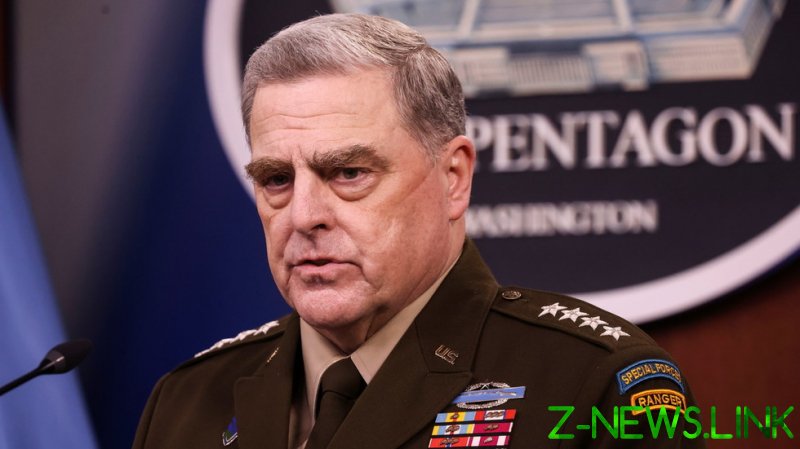 Excerpts from ‘Peril’, due to be published in a week, appeared on Tuesday on CNN and in the Washington Post, which employs its two authors – Robert Costa and Bob Woodward, of Watergate fame. It claims to be based on more than 200 interviews with “firsthand participants and witnesses” of the last three months of Trump’s presidency.

The coverage in corporate outlets dovetails neatly with their institutional bias against the Trump presidency and their established narrative about the 2020 election, the January 6 ‘insurrection’ at the US Capitol, and the ‘resistance’ of career bureaucrats and ‘deep state’ institutions to “rogue” Trump.

In their telling, Milley – the US Army general who chairs the Joint Chiefs of Staff, emerged as the hero who saved the day, coordinating with the CIA, the NSA, top Democrats, and even his Chinese counterpart to ‘protect’ America from an unhinged president.

On January 8, Woodward and Costa claim, Milley called a “secret meeting” at the Pentagon and instructed officers in charge of the National Military Command Center not to take orders from anyone unless they go through him first.

“No matter what you are told, you do the procedure. You do the process. And I’m part of that procedure,” he reportedly said, and made them verbally acknowledge the order.

Milley also canceled Trump’s orders for withdrawal from Afghanistan by January 15 and even reached out to his Chinese counterpart to reassure him the US would not attack, according to the book.

Meanwhile, he also got a phone call from House Speaker Nancy Pelosi (D-California). Costa and Woodward include an alleged transcript of the call.

“What I’m saying to you is that if they couldn’t even stop him from an assault on the Capitol, who even knows what else he may do? And is there anybody in charge at the White House who was doing anything but kissing his fat butt all over this?” Pelosi said, adding, “You know he’s crazy. He’s been crazy for a long time.”

“Madam Speaker, I agree with you on everything,” Milley responded. After the call, he reached out to NSA Director Paul Nakasone and told him “Needles up…keep watching, scan.” He also reached out to CIA Director Gina Haspel, telling her to “Aggressively watch everything, 360.”

In other words, the top military official was telling the intelligence community to spy on the elected government. Costa and Woodward acknowledge as much, writing that Milley was “overseeing the mobilization of America’s national security state without the knowledge of the American people or the rest of the world.”

According to them, however, this was fine because Milley believed his actions were “a good faith precaution to ensure there was no historic rupture in the international order, no accidental war with China or others, and no use of nuclear weapons.” Apparently loyalty to the ‘international order’ trumped the US Constitution and his oath to it.

He wasn’t alone, either. According to Woodward and Costa, it was Haspel – appointed by Trump in May 2018 – who called Milley and said the US is “on the way to a right-wing coup.”

“The whole thing is insanity. He is acting out like a six-year-old with a tantrum,” the CIA director reportedly told Milley.

While the Washington establishment largely applauded Milley’s conduct, one of their own was outraged. Alexander Vindman, the now-retired lieutenant-colonel instrumental in Trump’s first impeachment over ‘Ukrainegate’ in 2019, tweeted that Milley must resign because he set an “extremely dangerous precedent” by usurping civilian authority.

“What is described here is wrong,” he added. “There is no ‘deep state’ but this narrative feeds into one.”

The riot on January 6 saw several hundred pro-Trump demonstrators break into the US Capitol just as the joint session of Congress was hearing objections to the electoral college vote count. The session was interrupted, and when the Congress reconvened later that night, those objecting were overruled by the outrage over what the Democrats and the media dubbed the ‘insurrection’.

Reports at the time spoke of Pelosi consulting with the Pentagon, Vice President Mike Pence and other institutions, but conspicuously omitted Trump – who was technically still commander-in-chief.

This summer, Milley drew criticism over blaming the riot on “white rage” and appearing to endorse the Democrat narrative while insisting he and the military were “apolitical.” However, it was his comments from a year prior – in June 2020 – that cast doubt on Woodward and Costa’s narrative about January 6 being his motivation.

At the time, Milley issued an unprecedented apology for walking alongside Trump through Lafayette Square, the park outside the White House that police had just cleared of rioters. It followed an angry letter from former Defense Secretary Jim Mattis, who denounced Trump as a Nazi seeking to divide America and using the military as props. After the Mattis letter and Milley’s apology, then-candidate Joe Biden said he was “absolutely convinced” the military would oust Trump from the White House should he lose the election but refuse to concede.

This narrative, that Trump was planning to ‘steal the election’, was used by Democrats to organize a “well-funded cabal of powerful people” involved in “an extraordinary shadow effort” to “fortify” the 2020 election – according to the famous February 2021 feature in TIME magazine, penned by Pelosi’s biographer who was in on the effort.