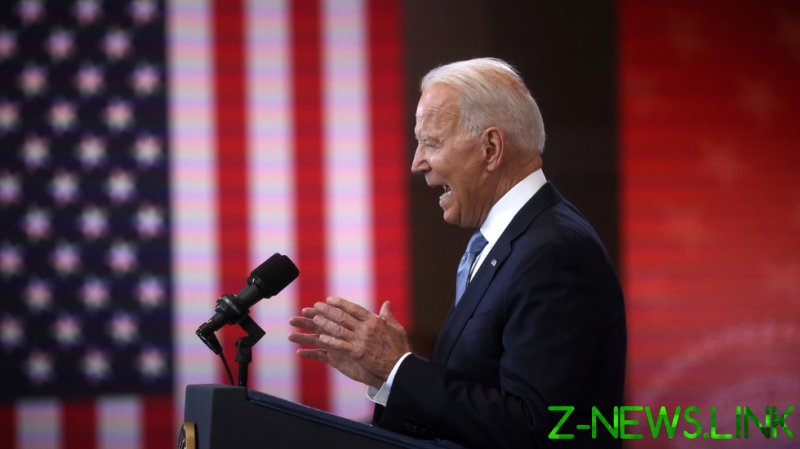 Making an appearance in Philadelphia, Pennsylvania on Tuesday, Biden condemned the election integrity laws enacted by a number of Republican-majority states this year as “vicious” and “odious” attempts at voter suppression and intimidation, taking “literally pernicious” forms.

“There’s an unfolding assault taking place in America today, an attempt to suppress and subvert the right to vote in fair and free elections. An assault on democracy, an assault on liberty. An assault on who we are,” he said.

He argued the Republicans were seeking to make it harder for Americans to vote and that they “subvert” the electoral process by changing who counts the votes and how in response to the “Big Lie” that his victory in the 2020 presidential election over the incumbent Donald Trump wasn’t on the level.

In his telling, the 2020 election was remarkable because officials around the country made it much easier to vote, so that over 150 million Americans – the highest number ever – voted amid a pandemic, yet also featured “unrelenting” political attacks, physical threats and intimidation by Republicans. Biden claimed that all the results had been confirmed by multiple recounts and all challenges heard and rejected by more than 80 judges.

“No other election was ever held under such scrutiny, under such high standards. The Big Lie is just that – a big lie,” he declared.

Never mentioning Trump by name, Biden argued that challenging the results of a presidential election was un-American – even though that’s what the Democrats did in 2016, when Trump won over Hillary Clinton, by pushing the Russiagate conspiracy theory.

“If you lose, you accept the results and follow the constitution. You don’t call facts fake and try to bring down the American experiment just because you’re unhappy. That’s not statesmanship, that’s selfishness,” he said.

According to Biden, Republican “suppression” laws and the US Supreme Court decisions that “weakened” the Voting Rights Act in 2013 and again this month are all part of the same continuum as slavery, the KKK “campaign of terror” after the Civil War, and the January 6 “deadly insurrection” at the US Capitol, “the citadel of our democracy.”

Biden reminded the audience that he swore an oath to defend the US from enemies “foreign and domestic,” implying that domestic enemies are the Republicans who dare doubt his legitimacy and advocate “voter suppression.”

However, he also undermined his own case that the purported voting restrictions were racist by saying the new laws were “not only targeting people of color, they’re targeting voters of all races and backgrounds” who might vote Democrat.

Telling an audience of cheering Democrats that “the world is watching,” Biden said he put Vice President Kamala Harris in charge of the push to pass two major pieces of federal legislation.

The John Lewis Voting Rights Act – named after a late Democrat lawmaker and former civil rights activist – seeks to reimpose VRA restrictions struck down by the Supreme Court.Meanwhile, the For The People Act – proposed by Democrats in 2018 – would effectively federalize elections and make most of the 2020 practices, adopted under the guise of the Covid-19 pandemic, permanent.

Several reporters noted that Biden made no references to removing the Senate filibuster – without which the proposals have no chance of becoming law. Democrats have a slim majority in the House of Representatives, but the Senate is split 50-50, with Harris as the tie-breaker. Harris told NPR on Tuesday she was “having conversations about exceptions to the legislative filibuster with senators,” when it came to the two bills.

Instead, Biden had raised his voice and said he would call on “Republican friends” on all levels of government “to stand up for God’s sake and help prevent this concerted effort to undermine our election and the sacred right to vote,” adding, “Have you no shame?!”

Biden closed his remarks by reminding the Democrats that the midterm elections in 2022 will be “another test… a new wave of unprecedented voter suppression and raw and sustained election subversion” for which they need to prepare now.

“We have the means, we just need the will, the will to save and strengthen our democracy. We did it in 2020,” he said.

“Joe Biden and Democrats have an election power grab playbook: lies and theatrics,” the GOP said in response to Biden’s speech, accusing the president of continuing the “dishonest attacks” on Republican state laws, which spokeswoman Danielle Alvarez described as “commonsense election integrity efforts” that would “make it easier to vote and harder to cheat.”