Home / WORLD / Biden calls Cuba ‘failed state,’ says ‘reinstating’ internet access there is one of the things US is considering

Biden calls Cuba ‘failed state,’ says ‘reinstating’ internet access there is one of the things US is considering 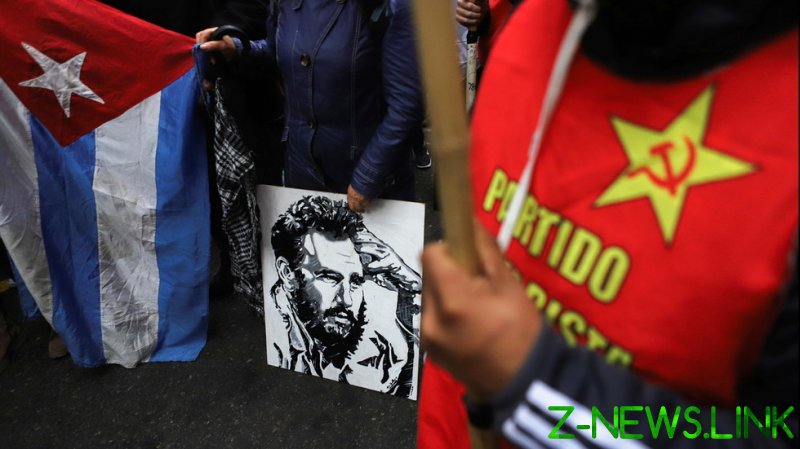 “Communism is a failed system, a universally failed system. I don’t see socialism as a very useful substitute, but that’s another story,” Biden told a reporter on Thursday, answering a question on Cuba during his joint press conference with German Chancellor Angela Merkel, who was visiting Washington.

“Cuba is unfortunately a failed state and repressing their citizens,” Biden added.

The US leader said there were “a number of things” his government was considering to help Cubans, but “they would require a different circumstance or a guarantee that they would not be taken advantage of by the government” of the island.

Allowing Cuban-Americans to send money to relatives was out of the question, he said, because it was “highly likely that the regime would confiscate those remittances or big chunks of it.”

Biden said he was willing to give a “significant amount of vaccine” to Cuba if some international organization would administer them “in a way that average citizens would have access to those vaccines.” The demonstrations that broke out across the island on Sunday were reportedly sparked by the spread of Covid-19 and lack of vaccination.

At this point, Biden chose to answer a question that wasn’t asked, noting that the Cuban government had “cut off access to the internet” and that his administration was “considering whether we have the technological ability to reinstate that access.”

The phrasing he used comes right out of the letter by Florida Governor Ron DeSantis. The Republican governor wrote to the White House on Wednesday, asking the president to “act immediately” to allow American businesses to “provide Internet access for the people of Cuba.”

“Technology exists to provide Internet access into Cuba remotely, using the innovation of American enterprise and the diverse industries here,” wrote DeSantis, adding that “our efforts must include creating a means for the Cuban people to speak to the world,” because that “may be the key to finally bringing democracy to the island.”

Another Republican, Miami Mayor Francis Suarez, has suggested the US could launch a military intervention to overthrow the government of Cuba. Biden did not weigh in on that option, however.

Havana has denounced the weekend protests as “systemic provocation” by US-backed dissidents. Cuba has produced two of its own vaccines against Covid-19, the government said, blaming the fact that no more than a quarter of the population has been inoculated on syringe shortages caused by the US embargo.

Florida is home to a sizable population of Cubans who left the island since Fidel Castro and the Communist Party of Cuba took over from the US-backed military dictatorship of Fulgencio Batista in 1959. The US initially broke off diplomatic relations in 1960, and imposed a military blockade of the island in 1962, during a nuclear missile crisis with the Soviet Union. Embassies only reopened in 2015, under Barack Obama’s administration in which Biden was vice president. Restrictions reimposed under the Trump administration are among the few measures by his predecessor Biden has not revoked yet.