Home / Society / Before the end of the Empire

As in 1989, people do not want sausage, and freedom

Boring power, the massive desire for change and demanding opportunity for citizens to influence events in the country, combined with a post-trust TV — that’s exactly what we’ve already seen three decades ago. This was followed by the loss of the Communist party’s long-standing monopoly on power and the collapse of the Soviet Empire. More recently, the Kremlin was sure that “zeroing” of presidential terms, giving a half decades of tenure, and “concreting” of the authoritarian political system will be the greatest victory for the authorities. But three weeks of protests raging in Khabarovsk showed that what was planned as a victory for the Kremlin, leads to his defeat. According to the Levada center, 45% of Russians have a positive attitude to those who appear in the Khabarovsk territory the protest, 26% neutral, 17% negative. And 29% are ready to participate in protests in the region personally. The source of power, finally decided to explain to her that she is just staff. 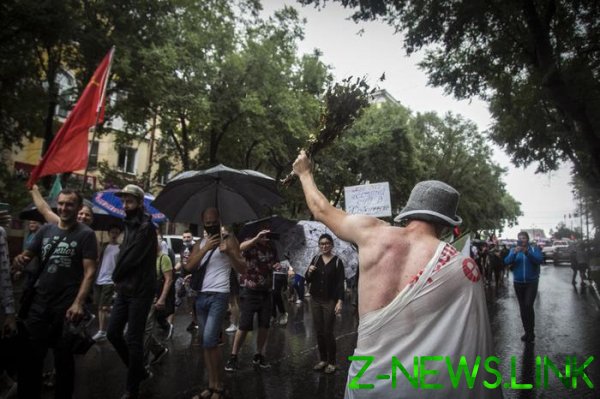 Judging by recent events and reactions to them, the Kremlin finally lost all sense of reality.

There for many years believed that the fart will be eternal and it will all get away with — “we will do whatever you want, and for us it will be nothing.”

What can make any personnel decisions — on the ground in submission will refer to the direction of the governors of any guard or hairdresser.

The TV will convince the doubters, and rubinovaja cope with a frown.

And now I sincerely wonder:

why Khabarovsk citizens then protested the removal of one Governor and the other landing?

Why not apply the gift immediately sent to “king’s table”?

Where is so pleasant for the authorities to “learned helplessness” citizens?

And why do citizens demand not only return of the Governor to hold a trial on the spot and send back the walking broom, and yelling “Down with the king!”.

The answer is simple:

citizens need to recognize their right to their own, and not imposed from above, the choice of power.

The slogan “Down with the king” is not just the requirement of resignation of the President.

This requirement to change the System.

And the requirement for real, not decorative political representation.

Exactly the same as three decades ago.

Then, in Soviet times elections were held in which citizens were elected deputies — the highest authority in the country.

Here only in practice MPs is not elected, but appointed.

The decision of the governing bodies of the ruling Communist party of the appropriate level was selected in any (social origin, gender, age, education, profession and so forth) the candidate who was nominated unanimously at the meeting of the relevant working team, after which were “elections without choice” with only one name on the ballot.

It is clear that to the real mission that didn’t have any relation — no matter how much ranted about “government workers” and “socialist democracy” is immeasurably superior to the bourgeois.

The response to this request become the first in many decades alternative (although with the “filters” in the form of “district meetings”) the elections of 1989, in Leningrad, Moscow and other major cities in the nomenclature of the Communist party suffered a series of spectacular defeats.

And then, and not already provided with any “filters”, with almost a free nomination, election 1990. Where a functionary of the Communist party or ispolkomovsky official would almost certainly have lost not only a non-partisan researcher, but also the operator of the gas boiler. Because the request for the change of policy meant, and a request for a change of government, which pursued a different policy.

Further well-known. As you know that after three decades, the System has almost returned to what it was.

But, returning to the past, she got a similar response from the public: the requirement for real public participation and the opportunity to choose not “filtered” candidates.

And defending the right to this choice — as it was during last year’s Moscow and St. Petersburg protests, when insolently refused to register opposition candidates. And the crushing defeat of progovernment candidates there, where there is an alternative — as in Moscow, Petersburg, Pskov.

This year everything is repeated in exactly the same phony “experts”, remove the list “the Apple” on elections in the Chelyabinsk, Kurgan and Ivanovo. But a number of opposition candidates still manages to break through — and it promises nothing good to the authorities that the party label of “United Russia” or bureaucratic position be for candidates all over heavy stone on the neck.

And the President’s support no longer works. And TV is spiraling out of trust, which is very conducive to Khabarovsk protest.

Recall that the first week of protests, the Kremlin’s propagandists, or were silent, or, as Solovyov, called the protesters “drunk trash” (happiness for Vladimir Rudolfovich that he did not go to Khabarovsk — I think it would not have saved any guards). Then called the protests “a few”, and “going into decline”. Separately referring to the “foreign provocateurs and bloggers” working for “Western patrons”, and “rock”atmosphere.

The result was unexpected and unpleasant for the Kremlin. How to tell my Khabarovsk colleagues, before seeing on TV stories about going out into the streets in Moscow or St. Petersburg, “a few misfits” heated “provocateurs” who are making “cookies from the state Department,” or looking different, “Anatomy of protest”, many believed that it was true.

And now have personally seen on the street — are one thing, but on TV is another.

You can certainly not believe my eyes three weeks in a row. But it is logical not to believe the TV. In Khabarovsk (and not only) understood: if the TV is lying about what happens to them now, he had lied about what was happening in the country. And failing to act in a propaganda — this is a very serious symptom, showing the inevitability of change…

Yes, it would be an unforgivable naivete to assume that the regime will take no effort for self-preservation.

A huge fine (without any guilt) journalist Svetlana Prokopieva, monstrously unjust sentence (although much more mild than was demanded by the Prosecutor’s office), the exposer of Stalin’s executioners Yuriy Dmitriev, the arrest for “treason” journalist Ivan Safronov (never had access to state secrets), criminal case (with a clear eye to prevent to the election) against Yulia Galiamina, fines and arrests of protesters, including single of the protesters, the rapid adoption of new repressive laws, the introduction of a “three-day vote” (the ballot papers cast in the afternoon, it was possible to replace the night) —

Nevertheless, it seems that stop changes will not happen. How to get three decades ago.

By the way, now and then, a request for change was political, not economic. Not about sausage, but about freedom. The freedom to choose those who consider it necessary (and responsible for their choices), freedom to say what they think without fear of persecution, the freedom to choose how to arrange their lives and what to do.

Yes, those who are in power today remember very well what happened as soon as Mikhail Gorbachev began to loosen the nuts: publicity, democracy, competitive elections, the abolition of the 6th article of the Constitution about the “leading and guiding role of the Communist party” and the list goes on. And all the forces trying not to repeat his “unforgivable mistakes” that led to “the greatest geopolitical catastrophe of the 20th century”.

Moreover, rave reanimation of the Soviet Empire in a new form.

But the earlier history they don’t know and don’t want to know. Do not understand: when the regime ends, there are only two ways out. Or as Gorbachev did, or like a hundred years ago.

When pointedly ignored public opinion, saying “we know better how to”, believed that any dissatisfaction can be crushed by hard labor, prisons and Cossacks, freedom temporarily granted “from above”, can take back, and to deter revolution — start a war.

Remember 1916: began to erode the national-Patriotic frenzy, ceasing to act spells on the protection of “brothers – Slavs”, the military victories (including the “Brusilov offensive”) are interspersed with disasters (the explosion of the battleship “Empress Maria”), mass strikes, one after another, sparking riots in the suburbs, the Emperor, unable to take the necessary decisions, and his court, occupied only with themselves.

And at the end of the year — the murder of Grigory Rasputin.

To the end of the Empire will be only two months.