Barcelona defeated Liverpool in the first leg of the Champions League 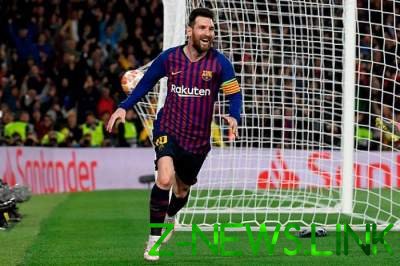 Lionel Messi and company made a serious bid to the exit in Madrid’s Champions League final.

The score in the match Barcelona have opened in the 26th minute – Alba shot in the penalty area, and Suarez sneaked away from guardianship of defenders and with a light touch sent the ball into the near corner.

About his formidable attack Liverpool for the first time recalled only in the 35th minute when mane missed the one-on-one with the goalkeeper. After the break, Liverpool were a serious test for Ter Stegen, the German goalkeeper “Barcelona” had to rescue his team after hitting Milner (twice) and Salah.

Barcelona played in frankly pragmatic football, which did not prevent the owners to develop their advantage. On 75 minutes, Suarez with his knee hit the crossbar, but Messi on the rebound, literally blew the ball into the net. Immediately, the Argentinian earned a dangerous free kick and masterful strike into the top corner brought the score to 3:0.

Immediately after the third goal, Liverpool had to return to the game, but the shot Firmino on the goal line blocked Rakitic and Salah on the rebound managed to get into the bar.

In the end, “Liverpool” thrown to the wolves own goal – Barcelona on the counterattack was to score the fourth goal, but Dembele did not completely bury the intrigue in this pair.

The return match of 1/2 final of League of Champions between “Liverpool” and “Barcelona” will be held may 9 at Anfield.