Home / WORLD / As rival US administrations antagonize China & Russia in turn, it’s clear for Beijing & Moscow they must stick together

As rival US administrations antagonize China & Russia in turn, it’s clear for Beijing & Moscow they must stick together 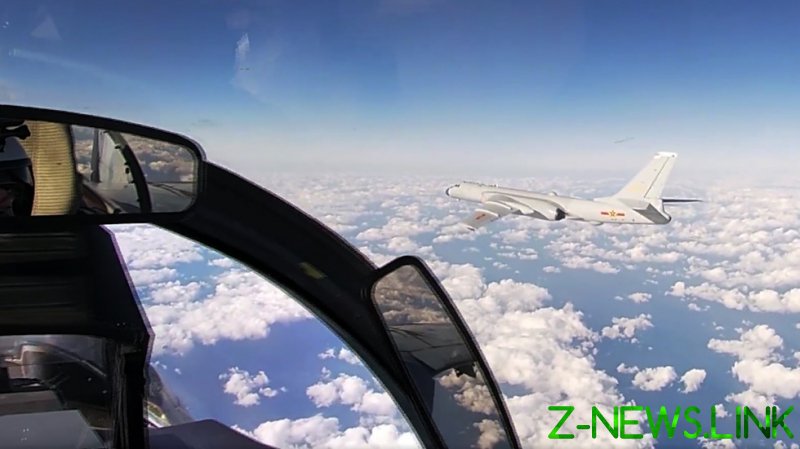 On Tuesday, Japan and South Korea were alarmed by a joint Russia-China bomber patrol which came close to their airspace, described as “a show of increasingly close military ties between Moscow and Beijing.” The jets flew down the Korean Eastern Sea (Sea of Japan) before heading south towards the East China Sea, both areas being the scene of particularly contentious territorial disputes between various countries. The patrol is not the first of its kind, the previous one being in July 2019, yet its timing is auspicious as the Trump administration comes to an end, with the White House having launched a confrontation against Beijing widely described as a new Cold War, and simultaneously having missed a window to attempt to reconcile ties with Moscow.

There is no China-Russia alliance as of yet to speak of, but there is an increasingly closer strategic partnership whereby the two partners see each other as a necessary counterweight to the West. The two powers do not see eye to eye on everything, but the mantra of ‘the enemy of my enemy is my friend’ suffices well in this situation. The complimentary addition of China gives Moscow leverage in its relationships with Japan and South Korea, whilst for Beijing, Moscow is a strong counterweight against broader efforts of US military containment. With the Biden administration likely to be far more anti-Russia in its approach than Trump, we should ultimately expect this axis to consolidate.

The Trump administration was at its heart, and quite obviously, not hostile to Russia. This of course proved to be its Achilles heel. Whilst Pompeo begged to differ, branding Moscow recently a “threat to our way of life,” on a strategic level the president was seemingly eager to try and improve ties to enlist Moscow as a potential strategic counterweight to Beijing. There is some evidence for this. For example, the president attempted to invite Putin back into the G8, a bloc which he was aiming to transform into an anti-China coalition, whilst he recently chose to blame China, as opposed to Russia, for a recent hack of US email accounts and institutions, and for the first time since 2011, Moscow has been invited to join a joint naval exercise with the US and its partners in the Indian Ocean.

However, it was always quite evident that Trump did not have the political space to reapproach Moscow in any serious way, especially given for the past four years the Democrats sledgehammered the president with allegations of collusion with Russia, and that longstanding issues such as with Ukraine failed to be resolved. Not surprisingly, this has all set the tone for the incoming Biden administration, which contrary to Trump’s more personal reconciliatory tone on Moscow, is likely to be far more hostile and will certainly play this up in aiming to dismantle parts of his predecessor’s domestic legacy. This change will come amid the current president’s bid to keep up the heat on China, which will have strategic consequences.

The result is that Moscow and Beijing share common grievances with the United States and its allies on a military and economic level. The specific theatres and regions at stake are largely different, bar some areas of overlap, yet the clout of a strategic partnership and the symbolic collusion of power matters significantly, as well as the ideological counterweight each offers the other against Western influence. Given the nature of the recent air patrol, one particular area where this has big implications is North East Asia, that is, the region surrounding the Korean Peninsula, Japan, and Russia’s Far East.

Here, both partners hold the common view that the increasing militarization of the US and allies in the region is detrimental to their interests. Just days ago, Japan announced a new record military budget, a move which is aimed at China and the US’ ‘Indo-Pacific’ initiative. South Korea also did the same thing. These record increases in military spending in these countries illustrate the changing international environment, and as result, Moscow and Beijing are collaborating by pooling their leverage to sustain the balance of power in their interests.

Whilst it remains unlikely that this shared sentiment will spread to Eastern Europe or the South China Sea, where both parties have different priorities, nevertheless, the rise of a Biden administration which wields mutual hostility to both is likely to foster broader cooperation, especially in fields such as technology, munitions, energy, finance, agriculture and potentially more things. This might not yet be enough to describe as an alliance, but it certainly is a comprehensive collusion of interests which the strategic context is aiming to consolidate. It would take an unprecedented breakthrough for the new administration to be able to change this trend, and there’s no indication, likewise with Trump and Moscow, that he will have the political will or space to do so.