Home / WORLD / As if black & white fungus were not enough: 1st case of deadly ‘YELLOW fungus’ reported in Covid-19 patient in India

As if black & white fungus were not enough: 1st case of deadly ‘YELLOW fungus’ reported in Covid-19 patient in India 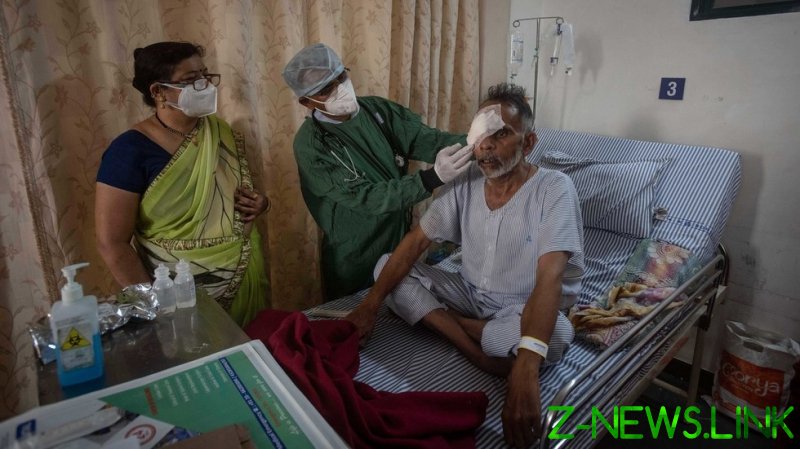 Dr. BP Tyagi, an otolaryngologist in the city of Ghaziabad in the state of Uttar Pradesh, said it was the first case of yellow fungus in a patient recovering from Covid-19. The 45-year-old man had been undergoing treatment for Covid-19 over the past few months, however, his condition deteriorated over the past few days, so he was admitted to the hospital and an examination revealed yellow fungus.

According to the doctor, yellow fungus is a potentially fatal disease caused by bad hygiene and humidity. It is more dangerous than black fungus or white fungus, as it’s difficult to diagnose because it starts inside the body, affecting the internal organs. Black fungus begins with a distinct facial disfiguration which is easy to spot. The symptoms of yellow fungus include lethargy, lack of appetite, weight loss, and in severe cases, the disease can lead to organ malfunction. He added that the patient earlier had symptoms of black fungus and white fungus, which are also complications of Covid-19.

This comes as cases of mucormycosis (commonly known as black fungus) and white fungus have been on the rise among Covid-19 patients in India. Several states declared it to be an epidemic. Fungal infections have been reported in patients who were put on prolonged oxygen support or have been prescribed steroids as part of treatment for Covid-19. Both black and white fungus affect the lungs and other vital organs and can be extremely dangerous.

According to Indian broadcaster NDTV, however, Ghaziabad’s chief medical officer, NK Gupta, has not yet been informed of any yellow fungus cases.

NDTV also quotes Dr. Randeep Guleria, a pulmonologist and the director of the All India Institute of Medical Sciences in New Delhi, who warned against naming fungal infections based on color and the areas they affect, as it could be misleading and could create confusion.

“In general, the types of fungus that we are mostly seeing are Mucormycosis, Candida and Aspergillosis. Mucormycosis is being found more in cases where Covid is compounded with steroids and diabetes. They are found in the nose, sinuses and may enter the brain,” Dr. Guleria said.
Candida, which has been linked with white fungus, was seen in those with weak immunity as “white patches in oral cavities… It may spread to the blood,” according to Dr. Guleria. The least common is aspergillosis, which affects the lungs and may cause allergic reactions. He did not elaborate, however, on the causes and symptoms of yellow fungus.