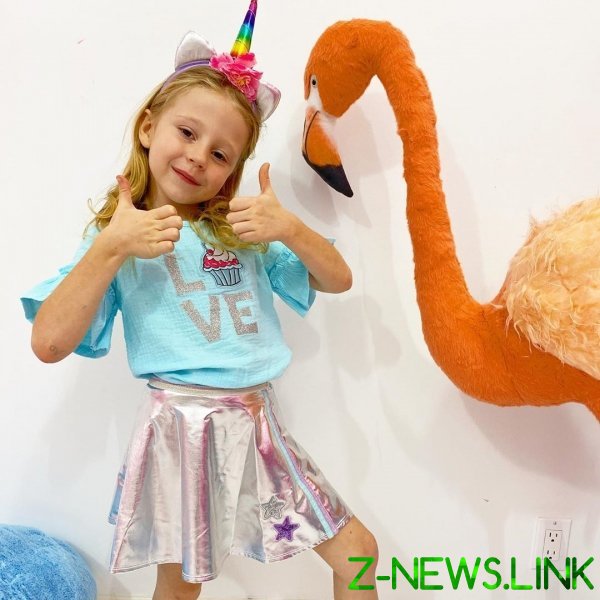 American Forbes magazine made a rating of the highest paid stars on the Internet. And third it took 6-year-old girl Anastasia Radzinska. Revenues the magazine estimated at $ 18 million. Photo source: instagram.com Initially the girl lived with her parents in Krasnodar, but thanks to the blog, the family was able to move to Miami. Now the girl vacations with her parents in the Maldives, changing the wardrobe every week, having fun on the coolest rides in the world, and anything does not deny. And his sixth birthday Nastya said in the company of such famous Russian artists as Philip and Alexander Revva. This was written by the Russian media. Not bad for such a young age, right? It all started not so rosy. At birth, the doctors gave Nastia a severe form of cerebral palsy and said that the girl will not go and hardly ever say the word “mother”. But the parents did not despair, and they abandoned all efforts on the treatment of the baby. To 2 years it turned out that the girl is in no way behind their peers, artistically surpass them “whether treatment and our love helped, whether the doctors made a wrong diagnosis,” recalled the girl’s mother Anna Rudzinska in an interview for Forbes.ru. The parents decided to develop the girl her acting abilities. Watched that on YouTube popular video on how the child unpacks the gifts, and decided to shoot the girl. The video was uploaded on a channel Like Nastya. Girl is not shy of the camera and showing their sincere emotions. Her channel began to quickly gain popularity — they were the same children, like her, who are tired of cartoons. The canal brought great money — several thousand dollars per month. Along with Nastya’s parents went to a 9-month trip around Asia and, of course, did not forget to put the video-notes from one showed the girl riding on the rides, taste local food. This gave the girl great popularity. She began to learn on the streets. Radzinsky decided to close his small business in Krasnodar (Bridal salon and a company for organization holidays) and to concentrate entirely on blog daughter. They hired for the filming of professionals and transformed the idea of video in a full-fledged business. And in 2017, moved to Miami, where it is always warm and the sun is shining. A new home in America became a real Studio for filming. Today, the main channel Vlog Like Nastya has 34.3 million subscribers, a record number of views for a single video 724 million times. Nastya is consistently in the top ten most popular bloggers in the world. Both parents fully devote all his time to this business. Photo source: instagram.com photo Source: instagram.com the mother of the young blogger says that you have to work a lot: to write scripts for commercials, organize, shoot and edit video. That’s all the wonder — child does nothing and makes millions. And the child is after all only an actor. Our channel is our work from dawn to dusk, it is the work of a huge team, without which nothing would have happened. What about the girl? Parents believe that the shooting bring Nastya pleasure. They say they removed the video in which the daughter wants to participate, and not worried about “star” girls. According to them, She gladly tries on a new dress unpacks gifts, acting out scenes with dad and just fooling around. In the future she wants to become an actress or to do business. Photo source: instagram.com photo Source: instagram.com photo Source: instagram.com photo Source: instagram.com photo Source: instagram.com the Experts warn that it is not so simple. This sudden popularity can be fraught with psychological problems for the child. The situation is the same as child movie stars. This often destroys their fate: fallen dramatically in popularity can affect how they perceive the world through the prism of what looking at him. Yes, children’s YouTube is a profitable business but I would, for example, didn’t want my children to become bloggers” — spoke about the situation with the blog girls Mikhail Karpushin, Director GetBlogger. How do you feel about the business, which involves the children?
Read to the Child BY: https://rebenok.by/inf/features/27420-kak-6-letnyaya-devochka-zarabotala-milliony-dollarov-na-bloge-i-perevezla-roditelei-v-maiami.html?utm_source=tut.by&utm_medium=title_block&utm_campaign=tut.by