“Arsenal” beat “Valencia” and closer to the Europa League final 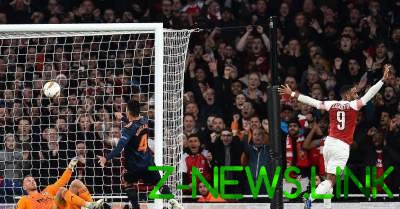 Arsenal in the first match of 1/2 final of the Europa League has issued a strong-willed victory over “Valencia”.

Arsenal completely failed in the opening minutes of the match, and Arsenal was very lucky that Valencia was limited to only one goal. In the 11th minute after the filing Parejo, Rodrigo dropped the ball on Giacobi, and he jumped over all the defenders and sent the ball into the net.

Having missed the chance to break away, Valencia missed after the first meaningful attack of Arsenal. Aubameyang went one on one with the Keeper and was given a transfer to Lacazette, who could break through on an empty goal.

In the 26th minute defense of “Valencia” gave another crack – Lacazette has responded to a canopy from the left flank and shot accurately into the near corner. The opposition goalkeeper cleared the ball out of the gate, but to cheat the system automatic recording of goals could not.

Probably the key point in this duel happened in the last minute of normal time. Another attack Arsenal resulted in a goal for Forward – back Gabonese at the far post slotted home a cross from Kolasinac. Now Valencia is one goal in the home match we need to score at least twice.

The rematch of Arsenal and Valencia in the semi-finals of the Europa League will be held may 9 on the “Mestalla”.