Home / sports / Arsenal and Chornomorets win on the road, a draw of FC Olimpik Donetsk and Vorskla

Arsenal and Chornomorets win on the road, a draw of FC Olimpik Donetsk and Vorskla 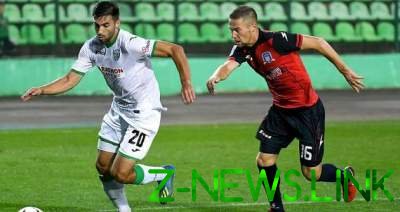 In the championship of Ukraine on football played the final matches of the 27th round.

“Olympic” in the second half and deservedly went from defeat in a house match with “Vorskla” and extended their unbeaten streak to four matches, allowing the club from Donetsk to gain a foothold in ninth position in the standings. In the end Marseille had a chance to snatch all three points but defender of “Vorskla” Martynenko with a foul of last hope plucked out one by one with their goalkeeper. To play the numerical majority of “Olympic” did not.

Arsenal sealed a fourth win in last five matches, and fined the leader of the “Karpaty” Mariana Swede for stupid destruction at the end of the first half. Now saving from the ninth position, Arsenal are only four points, but a month ago it seemed that the capital club have nothing to save from falling in the First League.

Chornomorets in away match against “Gums” until the 86th minute was lost 1:2. In the end, the Sailors at the last minute he scored three goals and won the first victory in the Premier League since 23 February, when on the road was suddenly a bit of the “lions.” Before an internal meeting with “Arsenal” “Chernomorets” behind his main rival for a place in the transitional matches by three points.