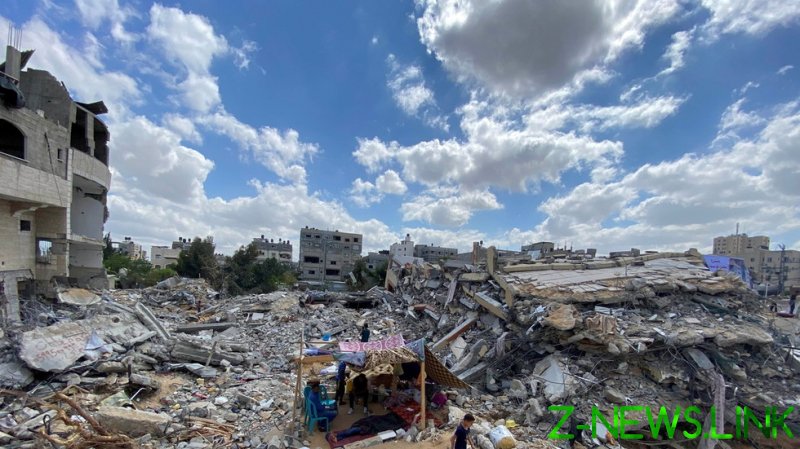 On Tuesday, Human Rights Watch (HRW) said that forces from Israel and Palestine carried out attacks during the May 2021 conflict that violated the laws of war and “apparently amount to war crimes.”

In their report, which brings together data from 30 interviews with eyewitnesses of Israeli attacks, video footage, satellite imagery and their observations from site visits in Gaza, HRW delivered a damning inditement of Israeli conduct during the conflict. The organization said that a more in-depth assessment of Palestinian attacks is still to come.

The group said it had investigated numerous attacks during the conflict, primarily focusing on the ones in which most civilian causalities were reported.

HRW said it had observed three Israeli airstrikes in which 62 civilians were killed but there was “no evidence of military targets in the vicinity.”

In one of the incidents probed by the NGO, a four-minute Israeli airstrike struck al-Wahda Street in Gaza City, resulting in the destruction of three multi-story buildings and killing 44 civilians. HRW said Israel has provided no evidence to support its claim that there were tunnels and an underground command center in the area.

Gerry Simpson, associate director at HRW, shared several of the group’s findings on Twitter, claiming that Israel’s partners, including the US, had supplied the Israel Defense Forces (IDF) with weapons that were used in two attacks which were investigated.

HRW said that Israeli authorities have demonstrated a “consistent unwillingness” to investigate reports of alleged war crimes as well as Palestinian attacks towards Israel. According to Simpson, this reinforces the need for an international probe led by the International Criminal Court (ICC).

HRW also noted Palestinian offenses, saying their 4,360 unguided missile launches towards Israeli population centers violated the “prohibition against deliberate or indiscriminate attacks against civilians.” Simpson said that they would separately report on attacks by Palestinian armed groups which killed 12 in Israel.

The IDF insisted throughout the conflict that it was only targeting locations used by Palestinian militant groups such as Hamas. Israel’s forces also published the coordinates of upcoming strikes to allow civilians the time to remove themselves from danger.

The IDF also ran a controversial social media campaign during the war, highlighting Hamas’ repeated attempts to target Israeli civilians and generally showing Gaza’s leadership in a bad light. One such Twitter post showed Yahya Sinwar, the Hamas chief, posing with a child armed with what appeared to be an AKS-74U assault rifle.

While Simpson’s tweets and the HRW report have been well shared on Twitter, some were not pleased to see the organization reporting solely on Israeli attacks. Professor Gerald Steinberg, the founder of NGO Monitor, called on HRW to do some “real research,” as he shared photos of armed Palestinian “terrorists.”

During the conflict, the ICC’s top prosecutor, Fatou Bensouda, warned warring parties that she was keeping a close eye on developments in the West Bank, East Jerusalem, and Gaza. The court had already opened a war crimes investigation in March concerning possible offenses committed in Palestine since 2014.