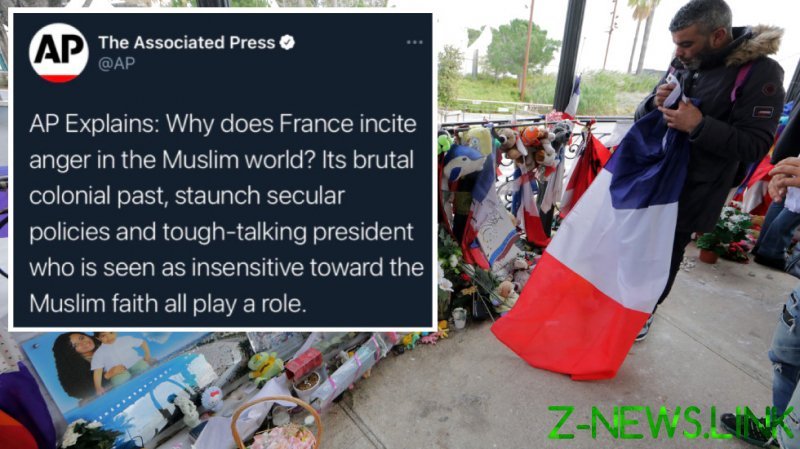 “AP Explains: Why does France incite anger in the Muslim world? Its brutal colonial past, staunch secular policies and tough-talking president who is seen as insensitive toward the Muslim faith all play a role,” the offending message screamed from the official AP Twitter account. It also linked to an article which gave the AP’s analysis of why France has so frequently been the target of Muslim extremists.

Unsurprisingly the message provoked a furious backlash against the US media outlet, which was accused of endangering the lives of French people. “This is not only disgraceful but dangerous. The Associated Press is inciting hatred against France and its people,” journalist Agnes Poirier wrote.

Many respondents accused the AP of being “apologists” for terrorism and “justifying” the murder of innocent people. Respondents also shared photos and details about the lives of people who were murdered by terrorists in France.

The relentless onslaught of criticism prompted the New York-headquartered media organization to delete the message on Sunday. Before it was removed the inflammatory post had already racked up over 10,000 direct responses.

The AP subsequently published a watered down version of the post and issued an explanation for its use of the word ‘incites.’ However, it stopped short of an apology and the article remains on its website.

“Many countries champion freedom of expression and allow publications that lampoon Islam’s prophet. Why has the reaction against France been especially virulent? Its colonial past, staunch secular policies and tough-talking president all play a role,” the new message read.

“This replaces a tweet about France and the Muslim world that asked why France ‘incites’ anger. The word was not intended to convey that France instigates anger against it,” a follow-up post added.

The replacement posts did little to assuage anger on social media, as Twitter users continued to post their objections to the AP’s handling of the issue.

The furor comes just days after an Islamist attacker armed with a knife killed three people in a church in Nice. That incident came less than two weeks after teacher Samuel Paty was beheaded outside his school 20 miles north-west of Paris, after showing students cartoons of the Muslim prophet Muhammed during a lesson on freedom of speech.