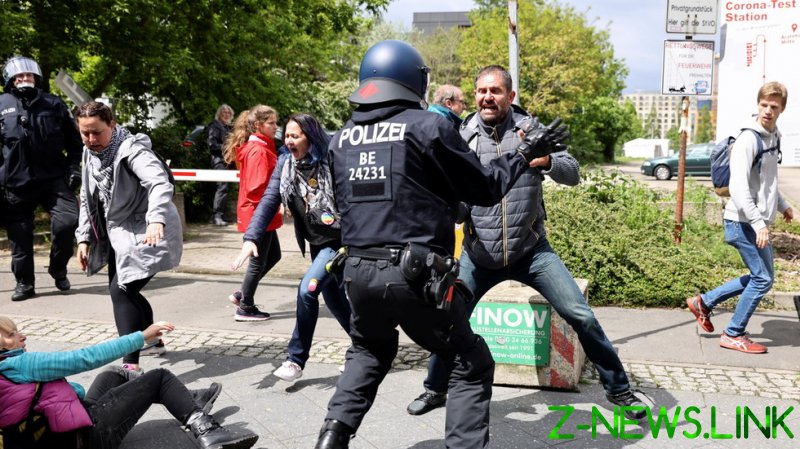 Speaking on Tuesday, Angela Pley, a spokeswoman for the BfV domestic security agency, said it was carefully watching members of the ‘Querdenker’, or ‘Lateral Thinkers’ movement, which has been involved in the organization of increasingly violent protests against Covid-19 lockdowns. The group’s members include conspiracy theorists as well as many suspected extremists, she stated.

“Legitimate protests against the coronavirus politics are being repeatedly and increasingly exploited to provoke an escalation,” Pley said, adding that the organizers of the protests have agendas that go far beyond countering Covid-induced lockdowns.

She noted that other groups such as the far-right ‘Reichsbuerger’ movement which denies the existence of the modern German state, and anti-Semitic organizations had played a leading role in the protests.

The BfV’s annual report, also published on Tuesday, amid a spike in politically motivated violence, stated that far-right ideologies were quick to grasp the anti-lockdown narrative. “Right-wing extremists took up the coronavirus debate and almost exclusively addressed the government’s protective measures,” the report noted.

The report also stated that violent crimes committed by the country’s far right rose by 10.6% in 2020, including a shooting which killed nine migrants in the town of Hanau.
More than half of the 44,692 politically motivated crimes recorded by the police in 2020 were committed by far-right extremists, the agency’s report said, but adding that left-wing related crimes spiked too.

Germany has been grappling to counter rising extremist crimes since the pandemic emerged. In August last year, the country’s parliament building was stormed, with many waving far-right flags.