Home / economy / After oil and Russian wheat will soon be worthless

After oil and Russian wheat will soon be worthless 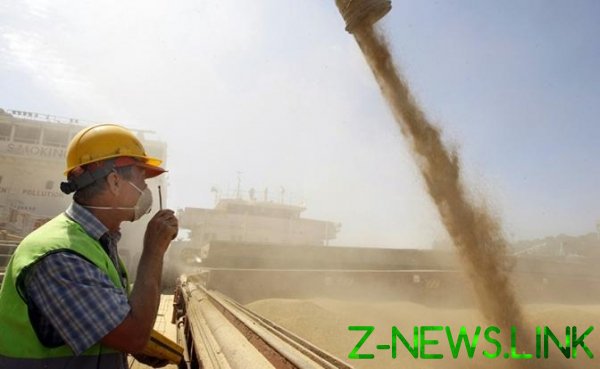 Director-General Food and agriculture organization (Food and Agriculture Organization of the United Nations, or FAO) Chinese qu Donjoy noted that “the supermarket shelves are currently filled, despite the prohibitions imposed by many countries to slow the spread of the virus. However, prolonged pandemic may lead to deformation of the food supply chains that have a negative impact on farmers, processing plants, shipping services, retailers and other entities.”

According to him, the international shipping industry has reported a slowdown in deliveries due to the closure of ports and logistics obstacles. In other words, food exporters, including Russia, also a major blow.

Thus, in may and June and can, on the one hand, there is a global shortage of food. On the other, farmers cannot sell their products to foreign customers.

For example, China, according to experts, will be protected from a serious deficit, since China has its own production of rice and wheat. Moreover, in volumes sufficient to feed 1.4 billion citizens. At the same time, Beijing does not hide the dependency on import of some crops, such as, for example, soybeans, which may lead to a sharp rise in food prices. The fact that China has left a niche for the supply of soybeans from the U.S. in order to offset the trade surplus with America.

It is clear that the conclusions will be made not only in China. Many States will revise internal policy to food and trade protectionism to the repetition of a pandemic caused by a different virus, to be highly protected.

The more modern the level of agricultural genetics, industrial agriculture, including drip irrigation, improve food self-sufficiency, even in countries that have unfavourable climatic conditions. For example, Egypt has successfully cultivates potatoes and even exports to Russia.

For economies with low level of technology intensive development of own production of food gives a chance for rapid growth of quality of life. The situation today is very similar to the economic processes that have occurred over the last 20 years in the oil market, said Austin Middleton, doctor of economic Sciences, George Mason University. For example, the oil distilled from shale in North Dakota, is a more expensive commodity than oil in Russia or in Saudi Arabia, but it becomes profitable above a certain price point per barrel. Meanwhile, 15 years ago, neither Moscow nor Riyadh had not considered it seriously. Technology and demand has done its job.

By analogy, the wheat grown on Kuban and in Ukraine, better, and cheaper, than in Siberia, or in some regions of Asia and Africa. However, if the world price of grain will be quite high due to growing demand, grain production even in unfavourable compared with the South of Russia regions will bring profit and bring up APK. Just like the shale in North Dakota, the terms of the deal, OPEC+.

If not for coronavirus crisis may be the processes of development of grain production in many countries would go much slower — in the context of national food security strategies. But in the period of post-Apocalypse COVID-19 to begin the redistribution of the global distribution of labor, especially in agriculture. Moreover, the scientific Foundation for the modernization in different countries. Underestimating the new technological opportunities is akin to “contempt for the slate,” some time ago.

Take, for example, Africa, which the Kremlin has in recent time to take care of, not least, as a market for Russian wheat. In larger regions South of the Sahara climate for grain production, of course, will deteriorate in parallel with the climate change. At the same time, in these countries there is population growth, take into account that the national policy simply must.

So, for the government of Zimbabwe, scientists, plant breeders, Wageningen University (the Netherlands) came to the conclusion that even here the possible growth of yield of maize, sorghum, millet and peanut through the use of new, more drought-resistant GM varieties and more effective use of features of the landscape. In the end, in the South-Eastern part of Zimbabwe, the closest climate with deserts, managed to double the total yield of millet from 1.67 to 3.29 t/ha. For comparison: with a favorable climate and proper care, the yield of this crop in Russia up to 1.7 t/ha.

Someone will say, millet — this is nonsense, not like wheat. However, this example shows how collaboration with Western scientific centers changes the usual picture in the food market. In Zimbabwe, according to Dutch scientist K. Hiller, farming based on crop production, increased average herd of cattle with 10-20 heads up to 30-80, thanks to new technologies and management methods. As they say, we would have.

In Africa South of the Sahara is growing at an accelerated pace corn production, especially in areas that were normally considered only suitable for growing sorghum and millet.

It would be wrong to praise the agricultural strategy of many developing countries in Africa and Asia. But in any case, they are observed causing the respect progress and the pursuit of food self-sufficiency.

You can not throw off the balance and the important factor is that European governments have a vested interest in self-sufficient agriculture of the African and Asian countries, at least in order to nullify economic migration to the EU. Hence, a solid investment, and aid “in intelligent crop production in semi-arid areas due to the expansion of knowledge about the varieties, environment and management factors”, and training local farmers. In fact, today there is the emergence of new competitors on the global food market for technological support of the leading scientific centers.

Meanwhile, in Russia, according to the President of AKKOR , Vladimir Plotnikov, half of small agricultural enterprises has a margin of 2-3%, are, in fact, on the brink of survival, in which any problem can become disastrous. The measures of the government of the Russian Federation is clearly not sufficient, no matter what big words have spoken to our officials. Yes, the money began to allocate, but it is not the only case.

Zimbabwe’s experience shows that profitability is increased primarily at the expense of quality planting material and productive technology with high automation level. We, alas, productivity is growing at the expense of hard labor. How to live and plow a typical Russian farmer, can be read on specialized forums:

“I have a schedule like this: 6am rise, tea, coffee. Then two cows to milk by hand. Then feed the pigs, cows, sheep, chickens, dogs, cats, then clean up for them — also manually. After lunch, cook food for pigs, then go mow the grass in summer. In the evening all the same. Only closer to midnight in the bath. Yes, in my SPARE time still need the technique to assist you to handle the field, to prepare hay and straw. For a sawmill to go, a couple of trailers of logs to saw. And in between smoke breaks mold cinder blocks over the summer several thousand manually can be done. Forgot sugar beet needs weeding, potato hilling and so on.”

In Russia prohibitive a lot of manual labor in the agriculture due to the lack of integrated solutions for farmers. This is due to the fact that the domestic industry is not able to produce the machinery, “turnkey”, for example “milking carousel” type AutoRotor Magnum 40, which are also available with the option of feeding. If to buy them for one Euro, Russian farmer will never pay off the investment. The same picture is observed and on the other modern agricultural equipment.

Meanwhile, qu Donjoy warns that today disrupted the logistics from producers to farmers. It concerns seed and chemical plant protection means and spare parts for already purchased equipment, why, unfortunately, Russia is heavily dependent. Taking into account the devaluation it would mean a setback to the stone age — its not, if you don’t count the tractors and combines, and then imported filling. In this situation 5-10 years even a favorable climate and vast fields will not be able to support our agriculture.