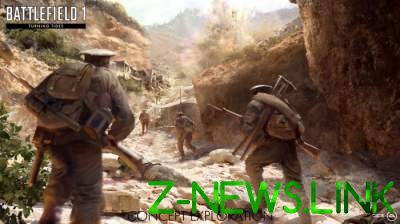 Before the release of the DLC all Battlefield 1 users will receive in December the opportunity to experience “Waves of change” thanks to the trial Premium access.

A month has passed since then, as in mid-September, users Battlefield 1 received a Supplement with a dashing Russian army “In the name of the King.” And now DICE is already preparing to release the next DLC with the Brits and amphibious operations, which is called “Waves of change”.

At this time, as the developers say, for the sake of “steady flow” of fresh cards, they decided to divide the flow of new content into two stages, the first of which starts in December this year and the second in January 2018.

According to DICE, even before the end of this year at least to owners of Battlefield Premium 1 Pass (which, as usual, will proceed to the “Waves of change” for two weeks before other players) will get:

● Map “Achi-Baba” is an intense and fast combat oriented infantry, during the British assault on the Gallipoli Peninsula in 1915, the year;

● Map “Cape Helles” — will storm the coast of the Gallipoli Peninsula with British troops, or to protect the building of the Ottoman Empire;

● Destroyer of type L with the cannon, anti-aircraft guns, torpedoes and mines;

Whereas in January 2018, the year moved:

● Map “German Bay” — a Grand sea battle between the Royal Marines of great Britain and the German Navy. Dreadnoughts, destroyers and airplanes to fight each other, while the infantry fights at the famous red cliffs of the Bay is Rocky;

● Map “Zeebrugge” — a daring RAID of the British on the Belgian port of Zeebrugge. Fight at sea and in the air, on land and in the melee;

● The British army — the Royal Marines.

DICE draws your attention to the fact that even before the DLC all Battlefield 1 users will receive in December the opportunity to experience “Waves of change” thanks to the trial Premium access.