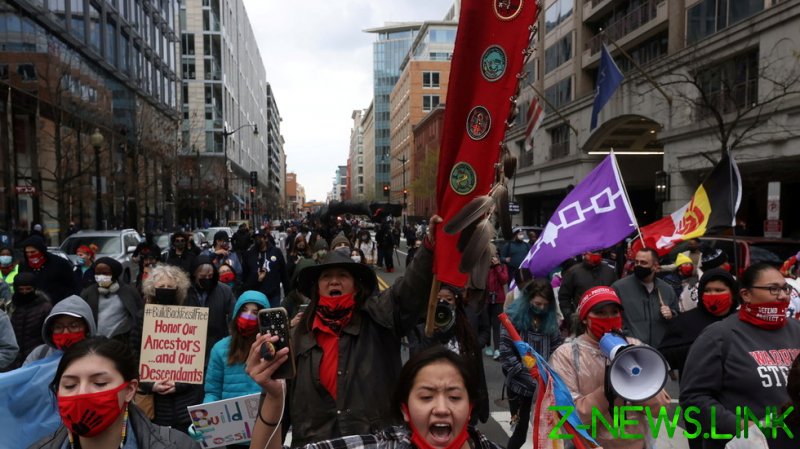 Representatives of the Standing Rock Sioux Reservation accused the new administration of talking the talk but not walking the walk on Friday, after the US Army Corps of Engineers refused to intervene in the long-running row between the Native American activists and the operating company behind the Dakota Access pipeline (DAPL).

“Today was the day to see whether this rhetoric was going to be matched with action and they fell short,” Jan Hasselman, attorney for Earthjustice group that represents the tribe, said after a US district court judge refused to rule on the legality of the pipeline, giving the operator and the Corps 10 more days to detail the economic impact of the pipeline’s potential shutdown.

Earthjustice compared Biden’s handling of the issue to that of Trump, who, unlike his successor, was an outspoken advocate of the project. “His [Biden’s] administration took a stance today that was identical to that of former President Trump,” the group said.

The tribe and allied environmental activists hoped that the Biden administration would move to halt the operation of the pipeline, arguing that it “poses an unacceptable risk” to the reservation and has operated “illegally” since March last year, when a federal court ruled that a permit to lay the pipeline under the Missouri River was issued without considering the tribe’s concerns that a possible oil spill could contaminate its drinking water.

US District Judge James Boasberg, who granted the delay, also appeared baffled by the officials’ feet-dragging on the issue. The hearing was initially set to be held in February, but was moved to April so the Biden administration has more time to catch up on the latest developments. Boasberg said that he “is a little surprised” that no progress was made in two months. “I would have thought there would be a decision one way or another at this point,” he said.

Lamenting the new setback in the battle to shatter the 570,000-barrel-per-day pipeline, Standing Rock Sioux Tribe Chairman Mike Faith said he was under the impression that the Biden administration “wanted to get this right,” but instead ended up ignoring the tribe’s demands and taking “the wrong path.”

The proponents of the project argued that Dakota Access meets all the safety requirements and that the tribe should not have a major say in the matter since the pipeline does not transit the reservation.

Opponents of the pipeline, which began pumping oil in 2017, argue that it may poison the river, a source of freshwater for the tribe. Its construction sparked mass protests in North Dakota in 2016, leading to a month-long standoff with authorities that ended in February 2017, with police razing a makeshift protest camp and arresting hundreds of indigenous demonstrators.