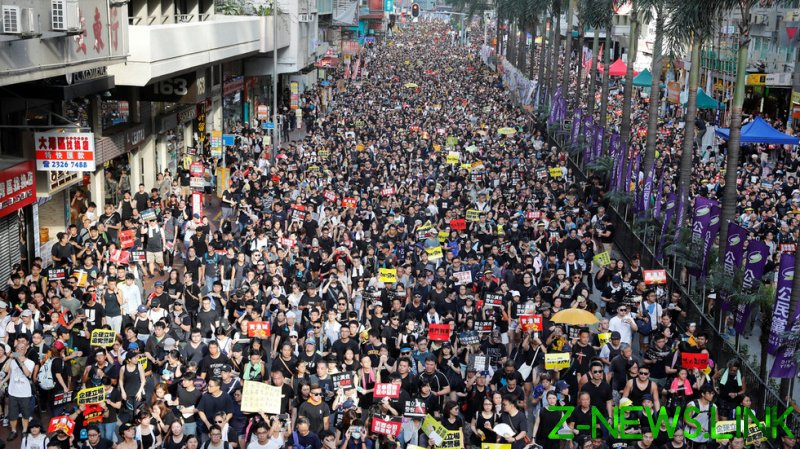 Secreted in the depths of academic journal American Economic Review’s June edition is an absolutely extraordinary research paper, revealing that a team of Western scholars conducted a somewhat peculiar study analyzing why students attended protests in Hong Kong – and that participants were paid to do so.

The paper’s abstract notes that the academics set out to study “the causes of sustained participation in political movements.” In order to “identify the persistent effect of protest participation,” and the role of social networks in organizing and motivating protests and protesters, they “randomly indirectly [incentivized]” – that is, paid – 849 students at the University of Hong Kong to participate in an “antiauthoritarian protest” for two years running, in 2017 and 2018.

The protest in question was the annual July 1 march, which has been convened every year since 1997, the year of Hong Kong’s handover from the UK to China. The academics say the marches studied were “peaceful” and “modestly sized”, attracting around 50,000 citizens, and sought “to both achieve policy concessions and signal the strength of the movement.”

They found that “incentives” to attend a political protest increased and, indeed, sustained subsequent crowd sizes, “but only when a sufficient fraction of an individual’s social network [was] also incentivized to attend the initial protest.”

Essentially, while a greater turnout among the wider population at large would “affect a subject’s beliefs about the likelihood that a public good is produced or a government crackdown may occur,” the participation of an individual’s friends had “a large effect on the social utility derived from protest participation, the coordination costs of attending, and social image considerations.”

The academics are keen to emphasize that they aimed to encourage protest participation without “explicitly” paying for people to attend, but instead “[paid] for behavior conditional on turnout.” So, the 849 randomly selected students weren’t directly remunerated for going to a protest, but for “providing information that would help estimate crowd sizes at the protest.” Participants were recruited via an email that was sent to the university’s entire undergraduate body.

Once the protests ended, participants filled in an online survey, and were given an additional HK$350 ($45) – about 1% of an average monthly wage on the island – for their “time and effort.” The original sum received for attendance isn’t stated.

“Subjects … received an email the day before the July 1, 2017 march with detailed instructions on how to complete the task. Treated subjects would be able to use a secure link to upload the information we requested,” the paper records. “Subjects who upload[ed] all the requested information and complete[d] the protest participation reporting module would be eligible to receive the bonus payment.”

If all that sounds rather strange, it’s because it absolutely is. For one, the academics’ finding that offering financial inducements to people to attend protests promotes turnout, particularly if those people know one another, seems banal and self-evident – a fait accompli if ever there was one.

The academics explain their rationale for conducting the research in the paper’s introduction, noting that, while “political rights have historically often arisen from successful, long-running movements,” there is a lack of empirical investigation into “the causes of individuals’ sustained participation in political movements.”

That seems reasonable enough, until one considers that the same group of scholars has been publishing papers on this question annually for quite some time – and, on each occasion, University of Hong Kong students have been their guinea pigs.

In 2016, for instance, their research included “manipulating” subjects’ beliefs about the participation of others to gauge whether a perception of ‘missing out’ drove greater attendance. A day before the July 1 protest that year, paid participants were provided with “truthful information” about other attendees’ protest plans to see if there was a corresponding increase.

That experiment was funded by the National Bureau of Economic Research (NBER), which, in 2010, ranked as the second-most influential economic think tank in the US. Two of the academics involved in the research, Leonardo Bursztyn and David Y Yang, are “affiliated scholars” of the NBER.

The organization is funded by a number of US government agencies and charitable organizations, including the controversial Bill & Melinda Gates Foundation, which raises the obvious question of who or what ultimately benefited from this research, and to what purpose the findings were put.

The latter riddle gets more curious when one considers that in their 2020 study of protest participation, the academics note that, while the University of Hong Kong’s Science and Technology (HKUST) department’s institutional review board (IRB) – the body that formally vets biomedical and behavioral research involving humans – approved their first “experimental intervention” with students in 2017, that approval was rescinded two years later.

“The HKUST Human Participants Research Panel (HPRP) wrote to us requesting that we remove references to the HKUST IRB approval of our study, on the basis that the study went beyond what was approved in our proposal,” the paper states.

Detail of this alleged breach of academic ethics isn’t provided, and the academics “unambiguously” reject the charge, although it may be no coincidence that HKUST sought to distance itself from the study on November 28, 2019 – the same month the violent “siege” of the University of Hong Kong erupted. The strife began when students disrupted road and train traffic near the campus on November 11 to facilitate a general strike.

The authorities responded by firing pepper bullets at students and launching volleys of tear gas into the campus, precipitating almost a week of ever-escalating violence from activists. Within days, students had created an elaborate system of barricades to block roads and shield the entrances to the university’s halls of residence, set traps to puncture car tyres, stockpiled a large number of petrol bombs, and were routinely hurling bricks and tiles, and firing arrows from rooftops at the police.

It’s unclear how many, if any, of the students participating in these incendiary activities were initially roused to political action by being “randomly” selected for the academics’ numerous protest studies over the years, but HKUST’s attempted backpedaling suggests it’s a distinct possibility that at least some were.