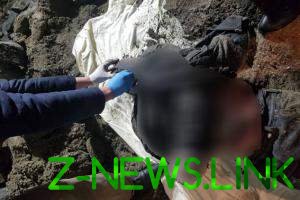 The body was thrown into the pit and poured concrete.

Because of hostile relations with the 43-year-old resident of Khust (Transcarpathian region) the wife and the son killed him, resulting in concreted in the well.

“A month and a half ago disappeared the 43-year-old resident of Khust. About the disappearance of a son in the police said his father. Missing man declared wanted. Law enforcement authorities established that wanted lived in a shared house with three children and wife, which was in the process of divorce. The suspicion of law enforcement authorities was the fact that after the disappearance of her husband and declaring him wanted gone his 40-year-old ex-wife and 17-year-old son. And in the house the woman made a hasty and concreted the old well”, – stated in the message.

Dug a well, the police found the man’s body at a depth of about 4 meters. He was sent for examination.

See also: state of emergency under the Odessa region: two men kidnapped and killed
On this fact initiated criminal proceedings under part 1 of article 115 of the Criminal code of Ukraine (premeditated murder).