Home / WORLD / A new Great Game is afoot in Afghanistan, as China hosts the Taliban and eyes a key role in the country’s future

A new Great Game is afoot in Afghanistan, as China hosts the Taliban and eyes a key role in the country’s future 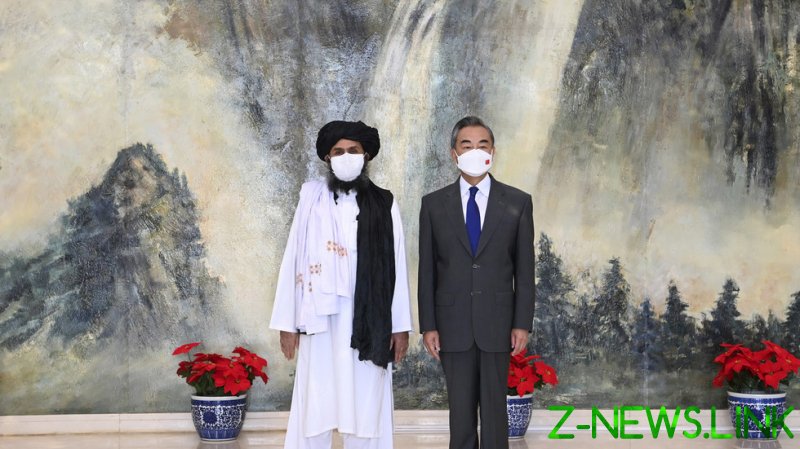 China this week took the highly unusual step of hosting a delegation from the Taliban in Beijing for talks, as concerns rise about the future of Afghanistan, amidst growing fighting and a massive offensive by the Islamist group against the government, whose days are increasingly seen as numbered.

Foreign Minister Wang Yi stated he expected the Taliban to play a role in the “peace, reconciliation and reconstruction process” in Afghanistan. The visit was interpreted widely by the mainstream media that China was giving its blessing to the legitimacy of the Taliban on the international stage, and this has occurred despite huge ideological and theological differences between the two sides.

Despite all that, they have found a set of “common interests” to collude in, concerning the future of the country. US Secretary of State Antony Blinken, while visiting India, said that the Taliban risks creating a “pariah state” but nonetheless admitted that China may have a “positive role to play” in the country.

Afghanistan is often touted as the “graveyard of empires,” with good reason, and the recent withdrawal of the US is the latest evidence. The strategic position of this country is as a pivotal gateway to all Eurasia. To its north is Central Asia and Russia, to its East is China, to its South is the Indian subcontinent, Pakistan and India, and to its West is Iran and the Middle East.

Placed between all these regions, geography has put Afghanistan at the heart of almost every single generation of great power competition, from the Mughals, to the British Empire, to the Cold War, to the War on Terror and now, the increasingly strenuous global rivalry between the United States and China. Beijing has made it clear in hosting this meeting that it embraces a policy of “non-interference” in other countries, but Afghanistan is on its doorstep, and it’s far too important and strategically significant to ignore.

Thus, China has jumped in head first. The Taliban, of course, would hardly be Beijing’s first choice of partner: it’s an Islamic fundamentalist group in a country that borders China’s politically sensitive Xinjiang region and the group has previously allied themselves with Uighur militants, much to Beijing’s disdain.

The Taliban also thrive on a legacy of anti-communism, which the US opportunistically weaponized against the Soviet Union in the 1980s. Their re-revival is undesirable, to say the least, yet it has to be dealt with “as it is.” The Taliban are now a dominant power in the country and have endured 20 years of war against the US and its allies and still managed to prevail. This war has made the reality plainly obvious, that you cannot bomb the Taliban out of existence, you have to work with them… and working with groups you might not like or agree with on shared interests is the staple definition of realpolitik.

In this case, China is scrambling to secure its own interests in the wake of the vacuum left by the United States, whose “irresponsible pullout” it staunchly criticizes. It is now being strong-armed into taking a leading role in shaping the future of Afghanistan. What does it want, exactly? Beijing wants peace, stability and economic growth in the country, a fresh start, and for it to be incorporated into the Belt and Road initiative.

Its biggest ally in this quest is Pakistan, who is Beijing’s best positioned partner to help leverage and negotiate with the Taliban. Beijing is not openly pushing a Taliban takeover; it is picking what it perceives as the inevitable, even if unwanted, victor. China’s message is that it expects the Taliban to behave and will demand assurances that the group will not resume sponsoring international terrorism. If this criterion can be met, then there’s space to work together.

The Taliban have signalled in turn they will not support China’s Uighurs, and see opportunity in Beijing’s invitations. But what is also worth considering is the bigger picture: that China is now discreetly and de-facto locked in a competition with India for influence over Afghanistan. India supports Kabul’s current government and staunchly opposes the Taliban.

Prime minister Modi pursues a “neighbourhood first” policy against Beijing, aimed at building India’s own local sphere of influence in light of tensions between the two. He sees Afghanistan as a pivotal and logical part of that “neighbourhood” – aiming to checkmate Pakistan, who it sees as using the Taliban as influence against it. New Delhi in turn frequently denounces what it sees as a China-Pakistan alliance to support the Taliban to create problems for India.

This means the struggle for Afghanistan’s future is wrapped in a number of localized geopolitical struggles alongside the pressing need to try and make things work in the country, one the United States is seemingly relieved to get out of after 20 years of failure. It is the new Great Game, a modern equivalent of the 19th century political and diplomatic confrontation between the British Empire and the Russian Empire, over Afghanistan and neighbouring territories in Central and South Asia, which had repercussions for Persia and India.

Not only are the Taliban finding they have momentum on the ground, but, irrespective of who actually prevails in the wider struggle, its leaders are very much enjoying their renewed status and diplomatic clout. It’s going to be a fascinating few years…