Home / Video news / A head-on collision of Audi and Mercedes in the city: 4 affected. Video

A head-on collision of Audi and Mercedes in the city: 4 affected. Video 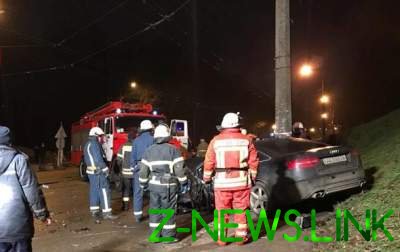 The Mercedes was moving at great speed and then flew into the oncoming lane.

In the capital on 1 January in the late evening accident occurred on the street Stetsenko, between the restaurant and street Dubki Saratov. In the accident injured four people, including a child, according to Facebook Kiev Operational.

“According to preliminary information, the Mercedes moved from the metro station Sirets in the direction of the International area, the Audi – in the opposite direction. Witnesses of the accident say that the Mercedes was moving at great speed and then flew into the oncoming lane. In the cabin of the Audi car caught the passenger that got the fighters of gschs”, – stated in the message.

In the end, all suffered the accident.

“Suffered all participants of the accident – four people. one driver in a Mercedes (the most affected), three – family, including a child. All were immediately hospitalized,” – said in the message.