‘2020 election in one clip’: Conservatives jeer as tiny group of protesters heckles MASSIVE crowd at Florida rally of Trump allies 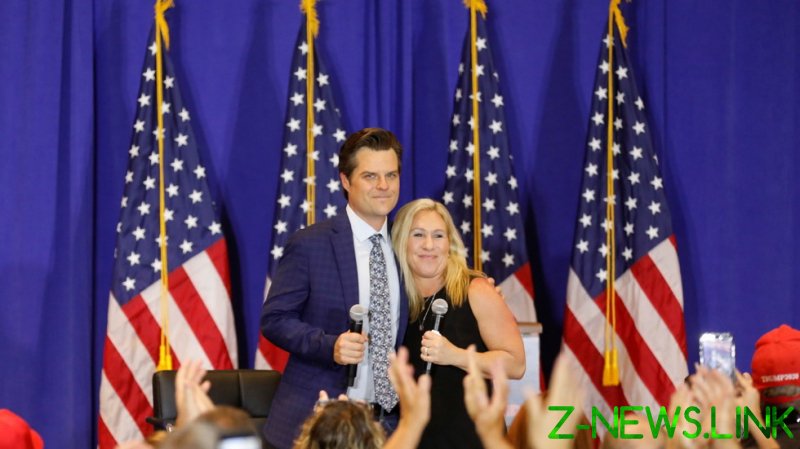 This strange scene was captured by media cameras on Friday, as a large crowd of seniors in the retirement community northwest of Orlando queued up for a rally in the style of former President Donald Trump. Instead of the 45th president, however, the stars of this meeting were young Republican members of Congress – Gaetz, who represents northern Florida, and Greene of northern Georgia.

Greene herself posted a short video on Twitter, showing a smiling Gaetz shaking hands with a cheering overflow crowd before going inside.

In addition to denouncing Trump and the Republicans, Democrats online and off also called the two members of Congress “traitors” for their support of the 45th president and daring to question the 2020 election results – which officially had Joe Biden win the most votes ever in US history.

Some residents of The Villages penned angry letters to the local newspaper, denouncing Gaetz for “sex crimes” and Greene for “bat s**t crazy statements.”

Gates has been slimed for weeks by corporate media allegations of supposed – but never specified – improprieties with “a former minor.” He has denounced it as a defamatory campaign and a part of an extortion attempt, insisting on his innocence.

Greene, meanwhile, saw herself stripped of committee assignments by the Democrat-majority House over her social media posts as a private person, with a handful of establishment Republicans joining in.

Gaetz actually brought up the persecution of Greene during the hour-long rally on Friday, mocking the Republicans who would rather throw their own to the wolves in hope the Democrats would treat them nicely afterward.

“We love you,” the crowd chanted to Greene at one point. They also cheered Gaetz when he quoted fellow Rep. Burgess Owens (R-Utah) saying that if vaccine passports – which Democrats are supporting – aren’t racist, then neither is asking for ID from voters.

The theme of their tour is “America First,” both a Trump slogan and a platform of the Republican faction supporting the populist ex-president against the establishment (“swamp”) in Washington.

The size of the crowd – Florida has long fully reopened from Covid-19 restrictions, and seniors were first in line for the vaccines – wasn’t the only sign of support for the Republicans in a county Trump carried by an overwhelming margin. One Republican wrote back to the local newspaper, saying that Democrats might be offended, but his side “still believe, as most Villagers do, that the presumption of innocence, freedom of speech, and freedom of association still exist in our country – and ARE protected by the US Constitution.”