Zyuganov tries to stop the split in the Communist party 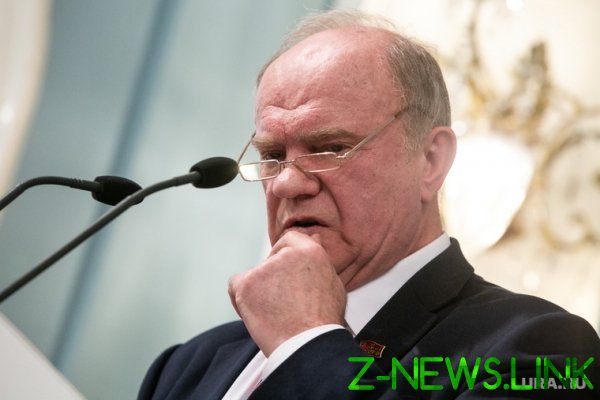 The Communists in the regions did not like the setup to a vote on the Constitution.

Communist party leader Gennady Zyuganov will try June 8 to overcome the split in the party, which was caused by his tough stance on voting for constitutional change. He will be in contact via video link with the heads of regional cells, what URA.RU reported by several sources. The meeting carried out, since the party in the regions did not support the decision that the party will oppose the amendments. Political analysts say that its leader has virtually lost control of the offices and now the situation is worse.

4 June, Zyuganov announced that the Communist party members can’t vote for the updated fundamental law, which did not take into account most of their suggestions. Due to the postponement of the election amid coronavirus Communists for a long time not voiced its official position, but now to the main political campaign of the year remains less month.

“We called on party members to vote against the amendments to the Constitution. We can’t vote for it. But we will continue to fight for normal repairs of the Constitution. In accordance with the law, he should be held by convening a constitutional Assembly,” reads the statement of the management. Ordinary Russians in the party advised “not to sit” and vote according to conscience.

This is the second decision Zyuganov’s vote. In the spring, when the regional deputies adopted the draft amendments, he demanded that the Communists abstained from participation in it. Then more than thirty parliamentarians went against his will and opposed the project. And four deputies in significant for the Communist party, in Irkutsk region (2015-2019 year it was headed by a Communist Sergey Levchenko), on the contrary, has supported changes in the future. Later in the party said they would seek consensus, and with the “rebel will work”. However, this situation could be repeated on a real vote, since many Communists in the regions did not suit the radical position of their leader.

It is particularly evident on the example of the Ural region. So, the source URA.RU in the Chelyabinsk regional Committee of the CPRF said that the statement Zyuganov against the amendments to the Constitution for many party members was unexpected. Therefore, to coordinate their positions, the center and the regions are separated. “On Monday, Zyuganov planned video conferencing with all heads of regional branches of the Communist party. It will develop a strategy and tactics related to the amendments to the Constitution,” he added. The head of the regional Committee Igor Egorov declined to comment.

In turn, members of the party in Kurgan region have a negative attitude to the idea of voting on the Constitution. The first Secretary of the Committee of the Kurgan regional branch of the Communist party Viktor Zyryanov said that it is “fiction” because, in his opinion, de facto amendments already entered into force. “The state Duma, legislative assemblies of subjects of Federation with a respective quorum has adopted all of the amendments, the Federation Council, adopted, the President signed the law. The constitutional court has not found any violations, so all this voting is a sham. If the 1993 Constitution was adopted under the muzzles of tanks, now under cov”, — the politician said in an interview with the Agency.

The Perm Communists in February decided not to hold any party position, and to Express the solution agrees with the CEC of the party, and vote against the amendments. However, in all cells of the party one way or another Express the idea of a boycott of the vote. Approximately 20% of local Communists will boycott the vote, and 80% will go to the sites, according to the news Agency. C the first has already held discussions that they supported the party’s position.

On voting day, many party members are going to be on duty at stations, but is unlikely to be able to observe the voting process. “They will stand with posters expressing the position of the Communist party and will try any way to control the process that the citizens voted against it. While the agreement for sending observers has not been achieved after 8 June will be known,” — said the Agency acting first Secretary of the regional Committee of the Communist party in the Perm Krai Kseniya Aytakova.

However, there are those who supported the decision Zyuganov. Known Tyumen and Yamal, the Communists did it in word and in social networks. Many of them, as, for example, the Deputy of the Tyumen regional Duma Ivan Levchenko, shared the decision of the Central Committee of the party on the pages of Facebook and Vkontakte. But in KHMAO, it seems, sees the split head of the Nizhnevartovsk cells Dmitry Khripunov expressed disagreement with the decision of Zyuganov.

Such dissonance in opinion is due to a long-standing contradictions within the party, said political analyst Pavel Danilin.

“The Communist party is a complex organization, recently came into a lot of young and oppositional frames. For example, in the far East, we even observed link between Navalny and the Communist party. Not to say that Zyuganov controls all the regional offices, he lost that control,” says the analyst. According to experts, the Communist party needed rebranding and strengthening of unity of command, which can only occur after the departure of Zyuganov. But nothing changes, what Zyuganov is trying to maintain the confidence of all party members at once, but division and separation, when the “old guard” pushed “by sistemdeki”, only gaining momentum, says Danilin.

However, the analyst Konstantin Kalachev said URA.RU that allegations of a split within the party cannot be considered consistent, since the Communists under the Charter are free to Express their views. According to Kalachev, speaking of the Communists against the amendments can cause anxiety in the Kremlin. Therefore, pointing out the contradictions within the party, the authorities are trying to undermine the authority of Zyuganov and to prevent the strengthening of the Communist party. “Now, of course, there is a desire to show that in the ranks of the Communists there is no unity. Encouraging citizens to identify and vote against, they attract more number of voters and create conditions for a protest vote in some regions. It can not strain your power, to the same left-wing ideas are popular, and electoral audience of the Communist party can grow” — said Kalachev.