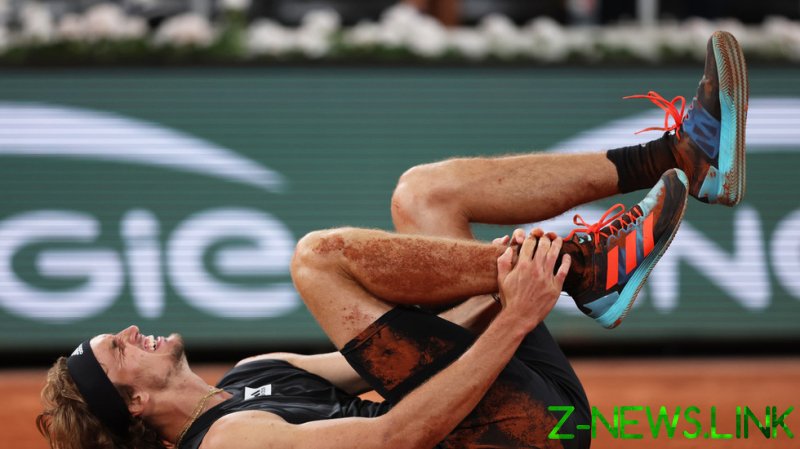 German tennis star Alexander Zverev looks set to miss out on this summer’s Wimbledon after withdrawing from his French Open semi-final opposite Rafael Nadal with what he described as a “very serious” injury to his ankle.

The third-ranked player in the world appeared to roll his ankle at the end of the second set against clay court specialist Nadal at Roland Garros on Friday, and appeared to be in significant pain – prompting medics to remove him from the court on a wheelchair as he was forced to forfeit his matchup with the Spanish great.

He later came back to the court on crutches to inform the umpire that he was unable to complete the match.

The injury came after two close sets in what was promising to be a nail-biting showdown between two of the world’s best players. Nadal came out on top in a tense first set 7-6, while the second was tied at six games apiece when Zverev suffered the unfortunate injury.

Zverev later took to social media to confirm the severity of his injury.

“A very difficult moment for me today on the court,” the 25-year-old star said.

“Obviously a fantastic match until what happened, happened.

“It looks like I have a very serious injury. But the medical team and the doctors are still checking on it.

“I want to congratulate Rafa, obviously,” he added of the Spaniard who is chasing yet anothere French Open crown. “It’s an incredible achievement, a 14th final, and hopefully he can go all the way and make some more history.”

The relative brevity of the match will likely be seen as a positive in the Nadal camp, though he expressed his sorrow afterwards at the manner of his victory.

Nadal will face Norway’s Casper Ruud in the French Open final after the eighth seed defeated Marin Cilic in four sets in his own semi-final.

The Spanish star has been battling a chronic foot injury for much of the latter part of his career – and he will enter Sunday’s final much fresher than anticipated after his abridged match with Zverev.

Nadal is chasing a record-extending 22nd career Grand Slam win at the event which he has dominated in Paris since his debut win at Roland Garros in 2005.