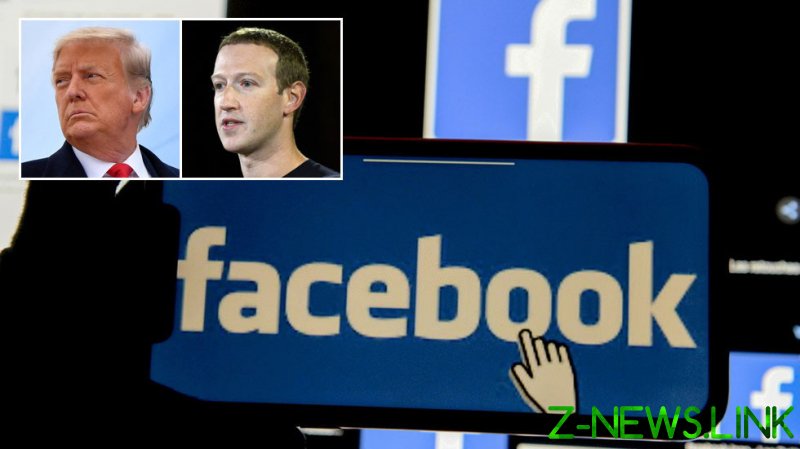 Zuckerberg announced the rebranding on Thursday, offering up a public-relations script about “building technology to connect” and needing to “put people at the center” and “unlock… a creator economy.” While the corporate pabulum may work on the general public, the media-political complex that’s had its knives out for Facebook for weeks was not so easily impressed.

The Washington Post, owned by rival tech oligarch Jeff Bezos, pointed out the move “comes amid a broader effort to shift attention away from revelations that it knew its platform was causing a litany of social harms.” Notice the language that assumes guilt and argues from it as a premise? Telltale sign of propaganda, that.

Just a day earlier, AP – ostensibly a news agency long considered a bastion of objective journalism – published what can only be called a hit piece on Facebook. In AP’s telling, it wasn’t the Black Lives Matter rioters who set the US on fire in late May 2020, but US President Donald Trump, with a post warning against looting and violence that Twitter famously censored – but Facebook refused to.

“Trump’s social media posts ignited more anger in an already deeply divided country that was eventually lit ‘on fire’ with reports of hate speech and violence across the platform,” AP editorialized.

Never mind that Trump literally criticized “THUGS… dishonoring the memory of George Floyd” – in the Great Retcon of 2020, the riots embraced by Democrats as a way to oust him from office, and stopped immediately after the election, need to be his fault. Twitter’s censorship of a sitting president needs to be model behavior, while Facebook’s refusal is cast as practically a crime.

Earlier this week, Zuckerberg complained about “a coordinated effort to selectively use leaked documents to paint a false picture of our company.” Both in a technical sense – as corporate news outlets have literally formed a ‘consortium’ to coordinate coverage of ‘Facebook Papers’ – and in a broader sense, he is correct. Yet this effort is just the latest push in a campaign by the media-political complex to censor social networks and bring them to heel.

Its public face is Frances Haugen, the “whistleblower” who provided Facebook’s internal discussions to Western lawmakers eager to take Zuckerberg down a notch. The former “counterintelligence” censor went from obscurity to fame overnight, landing a ‘60 Minutes’ interview and two testimonies before the US Congress, followed by a jaunt to the UK. Perhaps because she is backed by lawyers and PR specialists connected to the Democratic Party – and another tech oligarch, Pierre Omidyar.

Another ex-employee of Facebook, Sophie Zhang, has also emerged – with accusations that the Menlo Park behemoth wasn’t censoring hard enough the “hate” and political botting in every country around the world, but she hasn’t received nearly as much attention as Haugen.

Like Haugen, Zhang doesn’t want Facebook broken up, oh no. They both call for more “moderation” and less “misinformation.” Translation: censor viewpoints the establishment in power dislikes. Freedom of speech? What a quaint concept, fit for the old republic that’s long been replaced by something called Our Democracy. Come on, man – pay attention!

The all-out effort to seize all means of narrative control and clamp down on all alternatives has never been more obvious. History suggests it’s unworkable, but historical amnesia is a feature of the present ruling class in the west, rather than a bug.

What’s different this time is that Big Tech wants to comply. At another congressional hearing this week, YouTube, TikTok and Snapchat executives fell over each other to prove they are totally different from Facebook/Meta and are doing everything to “protect children” and fight “hate” and support Our Democracy, and so on.

Zuckerberg himself complied, and how! It’s forgotten now that billionaire globalist and Democrat mega-donor George Soros went on a jihad against Facebook in early 2020, accusing it of helping Trump get re-elected and demanding the heads of Zuckerberg and his lieutenant Sheryl Sandberg. Then the riots started and he dropped the subject – even as Zuckerberg spent over $400 million of his own money to “fortify” the elections for the Democrats, in what must have been a complete coincidence.

Moreover, Facebook’s shadowban of the New York Post’s story about Hunter Biden’s laptop from hell – the ‘October surprise’ of 2020 – was far more effective at suppressing it than Twitter locking the paper’s account, to name just one example.

No doubt Zuckeberg thought both things will ingratiate him with Our Democracy and make the attacks stop. The thing about bribes, however, is that they have a way of growing ever larger. Though a very smart man, neither Zuckerberg nor his lieutenants seem to have realized yet that addressing one pretext or the other won’t make the hounding stop.

Back in 2016, it was “Russian meddling,” a conspiracy theory used to justify Hillary Clinton losing the election to Trump even with 96% of the legacy media overtly supporting her. That was the first pretext to herd Silicon Valley down the slippery slope, away from free speech and towards censorship. It’s been a downward slide through “misinformation” and “hate speech” and “protecting the children” ever since.

All of those are pretexts and excuses, however. The endgame is power. A regime based on perception management absolutely must maintain total narrative control, and it simply can’t trust anyone even remotely capable of challenging it. They will keep coming after Zuckeberg no matter how “meta” he tries to go, because that is who they are.